Irish Mother Forced to Throw Away Breastmilk at Airport Security

This is beyond frustrating

If you breastfed, or supported someone who did, you know the pain of spilling even an ounce of that hard-won nectar. As it's often been said, you are absolutely allowed to cry over this particular spilt milk.

Imagine having to hand over bags of the stuff to a group of bamboozled security guards. That's what happened to Irish woman Clodagh Power as she travelled to Paris this week.

Security staff at Orly airport made Clodagh discard the liquid as it wasn't in the regulation 100ml containers or a plastic sandwich bag.  It was, of course, in breastmilk bags where it belongs.

To add insult to injury, this all happened on International Women's Day... Ouch.

I rarely post personal things, let alone a thread (and I know there are bigger things in the world and that I am privileged) but before I chicken out let me tell you what happened to me today at Orly airport in Paris. I travel for work regularly at the moment, and I have a small

Taking to Twitter, Clodagh said: "I rarely post personal things, let alone a thread (and I know there are bigger things in the world and that I am privileged) but before I chicken out let me tell you what happened to me today at Orly airport in Paris."

Like many breastfeeding mothers who work, Clodagh regularly transports breastmilk and occasionally meets some resistance at the airport, as she explained: "I travel for work regularly at the moment, and I have a small baby who I am breastfeeding. Every time I fly I bring a compact insulated cooler bag for pumped milk. When I reach security I explain and there are usually some questions, and the occasional humiliation as the security staff wave everything around in front of fellow travellers."

This time, however, the confusion resulted in her losing her precious cargo: "Today they forced me to throw out the milk. Their rationale? I must have my baby with me to bring the milk. Let’s just pause on that logic for a moment." 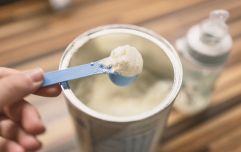 END_OF_DOCUMENT_TOKEN_TO_BE_REPLACED

She continued: "In future if I want to travel with pumped milk, I must pay to check in a bag or I can put the milk in little 100ml bottles, which must then be put into those little plastic security bags. I was profusely reminded that I’m only allowed one of those bags, which does not leave much room for milk."

She went on to describe an odd reaction from one particular member of staff at the French airport: "...the (male) security manager was at such pains to demonstrate his awareness of my plight that he mimed how sore it would be for me not to pump. I’m not sure which part was lowest, that could have been the nadir."

Absolutely livid for this woman. Even though breast milk and formula are exempt the liquid limit at airports is so redundant and outdated anyway, can we not get rid at this point?! https://t.co/PNmQrXv3Ey

She finished by subtly pointing out the horrible timing of the incident, saying: "It’s take off now so I’ll leave it there. Happy #InternationalWomensDay.”

Clodagh's Tweet soon gathered traction and the response from her followers was that of shock and anger on her behalf. One said: "How dreadful, so humiliating and so unnecessary, I’m so sorry."

Another added: "Potentially could this be flagged to their management as discrimination?"


popular
Study says that these childhood experiences can affect our health for life
Brad Pritt reveals he may have rare condition prosopagnosia
2-year-old boy orphaned after losing both parents in Highland Park shooting
Should I let my 6-year-old daughter dye her hair?
Parents sue TikTok after their daughters die during 'blackout challenge'
Planning a weekend away? Here are 5 fun family attractions to visit in Mayo this summer
Chris Pratt responds to backlash over 'healthy daughter' comment
You may also like
4 days ago
Opinion: The obsession with routines and sleep training for babies is weird – and stressful
5 days ago
Mum gets mixed reaction to photo of her drinking beer while breastfeeding
1 month ago
Not everyone breastfed before formula was invented, you know
2 months ago
Man claims wife needs to pay for baby's formula after she stopped breastfeeding
4 months ago
This ONE tiny change could make breastfeeding easier for new mums and babies
6 months ago
Amanda Byram gets honest about her breastfeeding struggles
Next Page