Nicole, also known as Coco, took her own life last year after being bullied in person and online for years.

Her mum Jackie is now fighting to make sure what happened to her daughter does not happen to anyone else.

Ms Fox made an emotional appeal to the Dail to bring in new legislation called 'Coco's Law' which would make it illegal to bully a person online.

Jackie told those present about the harrowing day that she and her teenage son discovered her daughter Nicole hanging from the bannisters in their home.

The heartbroken mum described how she tried to keep her daughter alive;

I dialled the ambulance and put it on speaker while I'm doing CPR and at the same time I'm rubbing her face and I'm begging her to hold on." 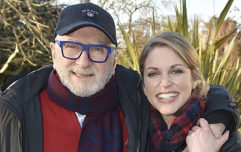 END_OF_DOCUMENT_TOKEN_TO_BE_REPLACED

Recently Eir announced that they will be including a leaflet containing Nicole's story and anti-bullying information with every new phone bought.

It will be launched on Safer Internet Day 2019, February 5.

While Nicole's family are happy that these information leaflets will be given out in her memory but they still hope to go further in their campaign to stamp out cyber-bullying for good.

popular
Lauren Graham shares who she thinks Rory's baby daddy is
Brian Dowling: "Aoife never thought the baby was hers"
7 Christmas markets and Santa experiences to visit with kids this winter
Warning issued to Irish parents after increase in RSV cases
He's back! 10 easy peasy Elf return ideas to kick off December with
Stuck For a Baby Name? Let These Online Generators Do The Work For You!
The ultimate list of Santa Experiences to get booking now
You may also like
1 hour ago
Amy Huberman marks six months without her dad in Instagram post
1 hour ago
"I have been shaken": Kim Kardashian addresses Balenciaga's disturbing campaign
2 hours ago
Rejoice - Christmas FM is back on the airwaves today
18 hours ago
Mum seeks advice after her son catches her with his gifts from Santa
19 hours ago
Here are the worst but best Christmas films on Netflix
1 day ago
"Enhanced x-ray technology" being trailled at Dublin Airport could lead to removal of 100ml liquid rule
Next Page