They say a photo tells a thousand stories. Well, we think this one is definitely a framer.

Kim Guiley, from California, was expecting her second daughter– so you can imagine her shock and surprise when she realised her little girl was, in fact, a baby son.

Captured by birth photographer Susannah Gill from Photographic Storytelling, the photo has gone viral thanks to its raw honesty, total surprise and undisguised delight.

The couple decided to name their son Theo.

Can't stop laughing at this awesome capture by our birth photographer @susannahgill_photostorytelling... After a lifetime of dreaming about one of each, but months of feeling so strongly that we were having another girl, this is the moment we discovered Theo's sex!!

'After a lifetime of dreaming about one of each, but months of feeling so strongly that we were having another girl, this is the moment we discovered Theo's sex!! 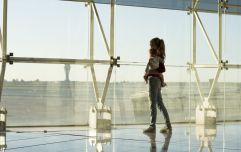 END_OF_DOCUMENT_TOKEN_TO_BE_REPLACED

The photo captured her reaction along with her partner, Travis, in complete shock. They are now the proud parents of a son and a daughter and say they feel incredibly lucky.

READ: Wow! Can This Gender Prediction Chart Really Tell You If You Are Having A Boy Or Girl?


popular
Say hello to the €40 M&S dress everyone needs in their spring wardrobe
Parents build two tiny homes on their property for their teenagers to live in
The gorgeous Penneys trousers that are a must-have for your workwear wardrobe
The differences between Dyslexia, Dyspraxia, Dyscalculia and Dysgraphia
Positive parenting: Kirsten Bell's advice for handling tantrums makes a lot of sense
Brides-to-be! The €50 Zara dress that's perfect for day two of a summer wedding
Ben Foden and his wife Jackie are 'expecting their first child together'
You may also like
10 hours ago
'Moments of empowerment' The postpartum picture that's making mums everywhere cry
5 days ago
These pictures of grandparents with their grandkids are the purest thing we've ever seen
1 week ago
One mum's letter to her daughter's school about homework is a must-read
1 week ago
Mum faces criticism for the snack she put in her daughter's lunchbox (and it seems pretty harsh!)
1 week ago
'The best gift I have ever been given' Mum shares powerful open letter about being a stay-at-home mother
1 week ago
The ad showing what new motherhood really looks like that was banned from the Oscar's this year
Next Page