He made Fine Gael history by being re-elected as Taoiseach on Friday and last night Enda Kenny has announced his Cabinet for the 32nd Dáil.

In case you missed it, the big news is that Frances Fitzgerald has replaced Joan Bruton as the Tánaiste, while Leo Varadkar has been moved from Minister of Health to the Minister for Social Protection.

Minister for Education is Richard Bruton and Simon Coveney becomes the Minister for Housing.

The Ministers of the 32nd Dáil with their Seals of Office pic.twitter.com/HTv1CFMcfV

Well-known Wicklow autism campaigner Simon Harris has been named as the Minister for Health. Just 29-years-old, Harris was the youngest TD in the Dáil when he was first elected in 2011.

Ministers of the 32nd Dáil await their Seals of Office from @PresidentIRL Michael D. Higgins pic.twitter.com/1pgqXB2YXD 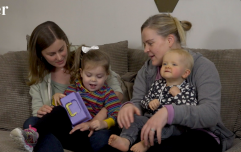 END_OF_DOCUMENT_TOKEN_TO_BE_REPLACED

Despite Enda's commitment to achieving a 50-50 gender balance in Government, only four out of 15 ministerial posts (or less than 27 per cent) went to women.

This is the new Cabinet in full...

popular
Dad asks public to forgive his wife after she killed their three children
Molly-Mae Hague's sister Zoe has just shared the cutest unseen pictures of baby Bambi
First Dates' Merlin Griffiths says recovery from bowel cancer "won't be fast"
Wayne Lineker called out for comment on Tommy and Molly-Mae's baby news
Fans believe Molly Mae has called her daughter after a Disney character
Fans call out Jake Paul for insensitive comment on Molly-Mae's baby announcement
Woman calls for child-free suburbs because she is sick of screaming children
You may also like
2 years ago
General Election 2020: Where the parties stand on Childcare and Flexible Working
3 years ago
Post demonstrates just how badly our Early Years Providers are being paid
6 years ago
So Ireland's New Taoiseach Has Been Elected...
6 years ago
#GE16: Is This The End of the Line For Water Charges?
6 years ago
#GE16: Minister for Children James Reilly Has Lost His Seat
6 years ago
This TD Had The Perfect Reaction to Winning A Seat
Next Page