Kate Middleton has spoken about how much she's enjoyed her royal tour of Pakistan in her first news interview in almost nine years.

She and husband Prince William have been travelling across the country this week, highlighting causes they are passionate about.

During a visit to a children's orphanage, Kate spoke to CNN's Max Foster

"William and I really wanted to come and see an SOS Children's Village like this," she said.

"There's so many vulnerable women here but they've really used their positivity and the support that the Village here provides them to support and protect the next generation of children in their care and give them the best possible start to their future lives."

In a rare interview, Catherine, Duchess of Cambridge told CNN that the royal tour of Pakistan with Prince William has been "really special." https://t.co/kA5StxfSmB pic.twitter.com/CyecMgSAVb

"It's been fantastic, we've seen a lot of Pakistan, a huge variety," Kate answered.

"It's amazing seeing some of the geography but then to see some of the community activities like this has been really special." 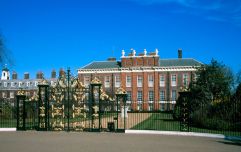 END_OF_DOCUMENT_TOKEN_TO_BE_REPLACED

It is the first time Kate has spoken on camera like this since her engagement interview with William back in 2010.

In that interview with ITV's Tom Bradby, the couple adorably revealed how their first meeting went and skirted around the question of starting a family.


popular
Vogue Williams slams man who refused to swap seats with her on plane
A mini heatwave could be coming our way in September
Mum issues warning to parents over frightening Cocomelon video
Here's how you can get "free money" from Revolut
Man (50s) arrested on suspicion of the murder of Miriam Burns
Here's where you can find school uniforms that will stand the test of time
Baby clothes from Shein and AliExpress have dangerous levels of harmful chemicals
You may also like
2 weeks ago
Here's how much Prince George and Princess Charlotte's new school costs
3 weeks ago
Revealed: The cheeky nickname Prince George's classmates use for him in school
3 weeks ago
The sweet bedtime ritual Prince Charles treats his grandchildren to has been revealed
1 month ago
"You're disgusting": Prince William roars at photographer who was 'stalking' his family
1 month ago
The royal family's sweet tribute for Father's Day made one thing very clear
1 month ago
Mike Tindall had some very harsh words to say about Prince Harry
Next Page