The dad-of-two comforted the terminally ill mother on air this morning.

Jeff Brazier appeared on This Morning today to discuss dealing with grief with viewers after Rio Ferdinand had been on to talk about raising his children alone after his wife died.

Jeff was forced to cope with the same situation when the mother of his two sons, Jade Goody, died in 2009.

Jeff spoke with one person in particular that left the entire studio close to tears.

Theresa rang in to ask for advice as she’s been told she only has two months to live.

The mum-of-three told Jeff and hosts, Holly and Philip, that her husband recently passed away suddenly and she herself has been given just two months to live.

Theresa was audibly upset as she explained her situation to the presenters, telling them that her kids refuse to accept that she is dying. 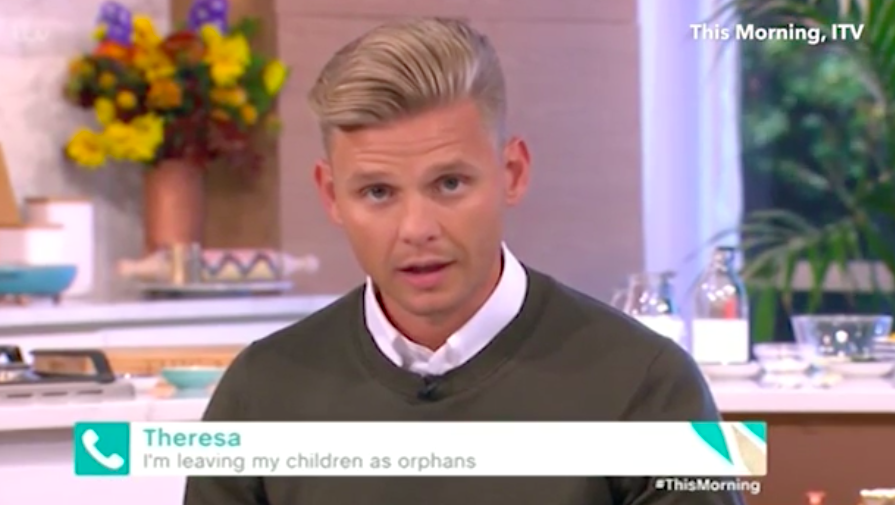 Jeff calmly asked Theresa for more information about her situation before assuring her that he would call her back after the show to talk things through in full.

Show presenters Holly Willoughby and Philip Schofield were clearly deeply upset as the mum begged them for help.

The response from viewers at home was that of pure heartbreak.

“My heart just shattered listening to Theresa,” said one viewer on Twitter.

There's more advice and support about bereavement on our helplines page https://t.co/LQgAr4VA49 #ThisMorning

Jeff later updated viewers on Twitter, assuring them that he and the production team from the show were working with Theresa to help her through this extremely difficult time.

For those deeply concerned about Theresa from the phone in today, I had a long chat with her afterwards & the show & I are now involved.


popular
6 fun things to do in Dublin on your next family day out
"You're disgusting": Prince William roars at photographer who was 'stalking' his family
I tried 'slow parenting' for a year and I'm never going back
Parent's Benefit Leave extended from today - here's what you need to know
Supermarkets add security tags to baby formula as cost of living crisis deepens
New sleep safety guidelines: "No co-sleeping at all"
Ireland's first Lego store in Dublin announce that it will be opening next month

You may also like
44 minutes ago
Clever! This is the No.1 reason your child is obsessed with Peppa Pig
2 hours ago
From teens to tots: Your weekend TV guide
4 hours ago
New sleep safety guidelines: "No co-sleeping at all"
6 hours ago
'My kids are never allowed alone in a room with a man'
9 hours ago
Opinion: The obsession with routines and sleep training for babies is weird – and stressful
9 hours ago
Supermarkets add security tags to baby formula as cost of living crisis deepens
Next Page