John McAreavey reveals baby number two is on the way

We're so delighted for them.

John McAreavey has confirmed that he and his wife Tara are expecting their second child together.

Announcing the news that Tara is pregnant and their son James is set to become a big brother, the couple posed on social media with the caption: "Lovely birthday weekend with @tara_mcareavey , James, and bump."

The couple welcomed their first child James back in December 2020, posting a snap of the two holding their newborn, all dressed in white, bar the baby who was in a knitted brown onesie.

John wrote on Twitter at the time: "Let the adventures begin," before he revealed what they had named their son.

John and Tara first met on a night out in Galway in 2012 following a football match that had been arranged as a fundraiser for his first wife Michaela, who was tragically murdered during their honeymoon in 2011.

Michaela was strangled in her room at the Legends Hotel in Mauritius while on honeymoon on 10 January 2011, after marrying footballer John McAreavey. 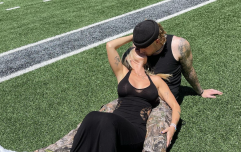 END_OF_DOCUMENT_TOKEN_TO_BE_REPLACED

To this day, no one has been convicted of her murder.

John and Tara exchanged numbers and began texting, soon becoming an item and eventually marrying in 2016 in a private ceremony in Kildare.

While life for the couple has had their challenges, John said he remains happy after being given a second chance at love.

He has previously said: "No girl dreams about getting married to a young man who has been married before and whose wife has been tragically murdered.

"I was able to find Tara and we've had a beautiful relationship and now we're about to have an addition to our family and it's just something that I feel so grateful for and I'm just so excited by that."

popular
Breaking: Female child found with severe injuries in Co. Clare
Fans defend Khloe Kardashian for posing in hospital bed with her newborn
Girl found injured in Co. Clare house is in critical condition
School threatens to suspend pupils who don't follow "outdated" uniform rules
Extra child benefit, IVF and free GP care: Key takeaways from Budget 2023
Budget 2023: IVF to be publicly funded and free contraception for under 30s
Vaccine programme to roll out in primary schools
You may also like
4 days ago
Eating carrots during pregnancy makes babies happy, study finds
2 weeks ago
Woman in Portugal gives birth to twins with different dads
1 month ago
Katherine Ryan opens up on becoming pregnant after two miscarriages
1 month ago
Natal Active, the celebrity favourite activewear for Mums & Mums to be launches in Ireland
1 month ago
Covid-19 vaccine is safe for people during pregnancy
1 month ago
Ailbhe Garrihy reveals she's pregnant with her second child
Next Page