Kate Middleton's outfit for Christmas lunch with the Queen is a true Christmas treat.

Tartan is a fabric that screams Christmas much like sequins signal a party and we adore the fact that the Duchess of Cambridge decided to wear a full-on festive look today.

According to reports, the tartan dress is by Emilia Wickstead and features a £1,000 price tag... yikes. 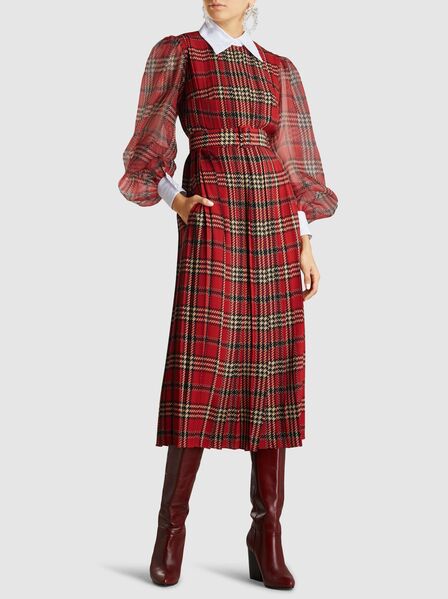 The Duchess is clearly a major fan of the designer and has a skirt in the same pattern, which she wore for a Christmas party she and William hosted in 2018 for the families of military serving in Cyprus during the festive season.

It's the Pris skirt and we adore the fitted style, check it out here.

Kate Middleton was pictured on her way to Buckingham Palace for lunch today with Princess Charlotte, her four-year-old daughter in the back seat, mischievous as ever.

Kate and William's youngest son, one-year-old Prince Louis was also in the car dressed in a wooly green jumper while Prince George (6) went in a separate car with his dad, sitting in the front seat.

END_OF_DOCUMENT_TOKEN_TO_BE_REPLACED

It doesn't look as though Meghan Markle and Prince Harry, the Duke and Duchess of Sussex, nor their baby son Prince Archie attended today's festivities with previous reports suggesting they're taking an extended break from royal duties and spending the holiday season in America with Meghan's mum, Doria Ragland.

Prince Andrew was also photographed driving to the event and although he recently released a statement where he said he was stepping back from royal duties in the wake of the scandal regarding his relationship with convicted sex offender Jeffrey Epstein, this doesn't appear to have affected his relationship with Queen Elizabeth.

Also in attendance are Prince Charles, the Duchess of Cornwall Princess Eugenie, Zara and Mike Tindall, Sophie, the Countess of Wessex and her daughter Louise to name but a few.

The Christmas lunch at Buckingham Palace is an annual affair and marks the start of the festive season for the royal family.


popular
Lockdown with the kids: 8 thoughts every mum has had during isolation
Kids still got a pesky case of lice even with school out? Here's how to fix it
This cot hack is so handy if you have two babies using a cot at the same time
If your toddler has cavities it might be down to how much toothpaste they use
Dirty Dancing the sequel is officially in the works and Jennifer Grey is starring
Anything but traditional: 10 boho baby names all trendy parents will love
These 5 Foods Could Increase Your Chances of Having Twins
You may also like
1 week ago
The dress Kate Middleton just wore is available in the M&S sale right now
3 weeks ago
Prince Louis is over social distancing, says Kate Middleton – and we feel him
1 month ago
The parenting trick the Duchess of Cambridge swears by when George or Charlotte misbehave
3 months ago
The Duchess of Cambridge checks in with mums who have just given birth during the pandemic
3 months ago
Prince William and Kate Middleton have hired Meghan Markle and Prince Harry's social media manager
4 months ago
Kate Middleton's stunning pink suit is from M&S and it's still in stock
Next Page