Kate Moss has shut down claims Johnny Depp pushed her down stairs when they were together.

The model was testifying in Depp's defamation trial against Heard today.

She stressed that the actor never harmed her during their time together.

Earlier in the trial, Heard claimed she heard a rumour that Moss was pushed by Depp.

However, the supermodel stressed that she fell after a rainstorm.

She told the court, "We were leaving the room and Johnny left the room before I did.

"There had been a rainstorm and as I left the room I slid down the stairs. I hurt my back. And I screamed because I didn’t know what had happened.”

She added that Johnny heard her screaming and helped her back up the stairs. 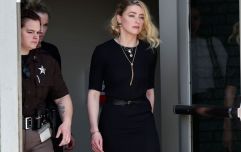 END_OF_DOCUMENT_TOKEN_TO_BE_REPLACED

She told the court that he carried her back to their hotel room. He then got her medical attention.

“No, he never pushed me, kicked me, or threw me down any stairs," she stressed.

Moss and Depp dated for around four years in the 1990s. The former couple was introduced to one another in New York. They split up in 1997.

Depp was 31 when they started dating, the Vogue model was only 20.

The trial is now in its sixth week.

It is believed it will end this coming Friday, May 27th.


popular
Multiple people killed in Denmark shopping mall shooting
I tried 'slow parenting' for a year and I'm never going back
Supermarkets add security tags to baby formula as cost of living crisis deepens
The bodies of three missing children and woman found in Minnesota lake
Musings: Now that it's summer, mums please get into the photos
Expert says Cocomelon acts "as a drug" to kids' brains
Say it isn't so: Workin’ Moms’ to end with Season 7
You may also like
1 month ago
Imelda May responds to backlash after defending Johnny Depp
1 month ago
Johnny Depp allegedly threatened to microwave Amber Heard's dog
2 months ago
Psychologist claims Amber Heard has personality disorders
2 months ago
Judge threatens to remove Johnny Depp fans for laughing during Amber Heard trial
2 months ago
Johnny Depp vs Amber Heard trial: the main takeaways so far
7 months ago
A documentary about Amber Heard and Johnny Depp is coming soon
Next Page