Her daughter Ellie is starting big school in September.

Kathryn Thomas has revealed her daughter is starting big school in September.

The mum said she is feeling emotional about the next stage of her daughter Ellie's life.

Speaking to the Sunday World, the mum said she is already suffering from separation anxiety.

"Ah sure, stop it,” she laughs. “Even when it was her last day in pre-school I made Padraig come with me because I just couldn’t [cope with] saying goodbye to the teacher and her leaving.

The mum-of-two admitted, "I was a mess."

Kathryn admitted that she wasn't sure if it was a good idea to send her daughter to primary school this year because she isn't 5 yet, but she decided it was the right time.

Ellie will turn 5 in March. 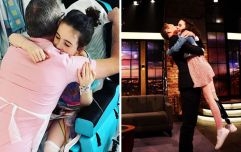 END_OF_DOCUMENT_TOKEN_TO_BE_REPLACED

"We weren’t sure whether we were going to send her because her birthday’s in March, so she’s four-and-a-half — so we were like, ‘Will we, won’t we, will we, won’t we?’ Anyway, she’s going in September."

Kathryn revealed her little girl will be going to an Irish-speaking school in September. The school is also close to her daughter's pre-school.

"It’s in the same grounds as her pre-school is and we walk to school every morning, so it’s not going to be too much of a jump."

"She’ll be grand — they always say that it’s worse for the parents than the kids. I had to go off and get the little uniform, the tights and the shirts.

"We went to a parent-teacher meeting there a month or two ago."

The presenter added, "It’s kind of surreal that we’re at that stage.”

Kathryn is a mum to two daughters-4-year-old Ellie and Grace.