"I just couldn’t figure out why people thought that.”

Khloe Kardashian has responded to claims she has had multiple face transplants.

The reality star has been accused of having numerous plastic surgery procedures throughout the years.

However, Khloe has shut down claims she has had '12 face transplants'.

The mum was speaking on Amanda Hirsch’s Not Skinny But Not Fat podcast when she addressed the claims.

She said she has had a nose job, but shut down rumours about other surgeries.

“It used to bother me when people were, like, I’ve had 12 face transplants.”

She said the rumours really offended her because they are not true.

The Kardashians star admitted, "I just couldn’t figure out why people thought that.” 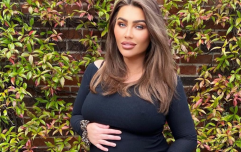 Lauren Goodger assaulted and taken to hospital after daughter's funeral

END_OF_DOCUMENT_TOKEN_TO_BE_REPLACED

“But the transplant thing, I just want to understand why. That sounds amazing later in life, but now, I’m good.”

She continued: “Either with … the old me versus what I look like now … or even just comparing me to my sisters all the time. It’s like, you guys, this is what we look like, so I feel like you should know by now, and enough.”

Despite shutting down the rumours, fans still believe Khloe has had more work done than she's admitting to.

One said, "Khloe Kardashian claiming that she’s not had surgery is ridiculous. Just own up to it, it’s so obvious when you’re face looks completely different in every picture."

"She doesn’t even look the same. Her face was so beautiful before the Botox, surgery, photoshop, implants, nip/tucks…"

Others said there's nothing wrong with having work done, but the reality star shouldn't lie about it.


popular
4-year-old girl killed in Sligo caravan park named locally
Musings: I think 'Lawnmower' parenting is damaging for children
This mum's post about dying to send her kids back to school is too funny
Tasha's dad responds to Jacques' Instagram video
Lauren Goodger assaulted and taken to hospital after daughter's funeral
Actor Anne Heche rushed to hospital after car crash
Investigation into the discovery of a body of a male, Drumcondra, Dublin

You may also like
3 weeks ago
Pete Davidson talks having a baby with Kim: ‘That’s kind of what I’m preparing for now’
4 weeks ago
Stacey Solomon calls out paparazzi who were stalking her on hen party
4 weeks ago
Declan Donnelly heartbroken after the death of his 55-year-old brother
4 weeks ago
Damian Lewis finds love again after the death of wife Helen McCrory
1 month ago
Christine McGuinness addresses break-up rumours
1 month ago
Chris Pratt responds to backlash over 'healthy daughter' comment
Next Page