Have we all fallen in love with Encanto yet?

In our house, I think we must have watched Disney's latest hit at least 10 times already since it dropped on Disney+ on Christmas Eve – and that is not counting all the gazillion times we have just looked up all the songs on YouTube and sang along (I mean; we cannot stop talking about Bruno ifyaknowwhatImean!)

This magical family saga about the Madrigal family in Colombia is everything is Disney movie should be – and then some. From the sweet and caring Mirabel, the movie's main character, who, despite being the only one in her family without any special powers, ends up saving everyone's magic, to the mysterious Bruno, the strict Abuela (grandmother) and Mirabel's sisters, Isabela and Luisa.

Where Mirabel is the cute, quirky underdog, her sister Isabela is everything we know a Disney princess to be, beautiful, enchanting, petite – the golden child of the family.

However, the character that has literally set the world on fire since the movie was released is Mirabel's older sister, Luisa – who, with her buff physique and bulging muscles, is like no female Disney character we have ever seen before. And yet it seems exactly what we have all wanted all along. 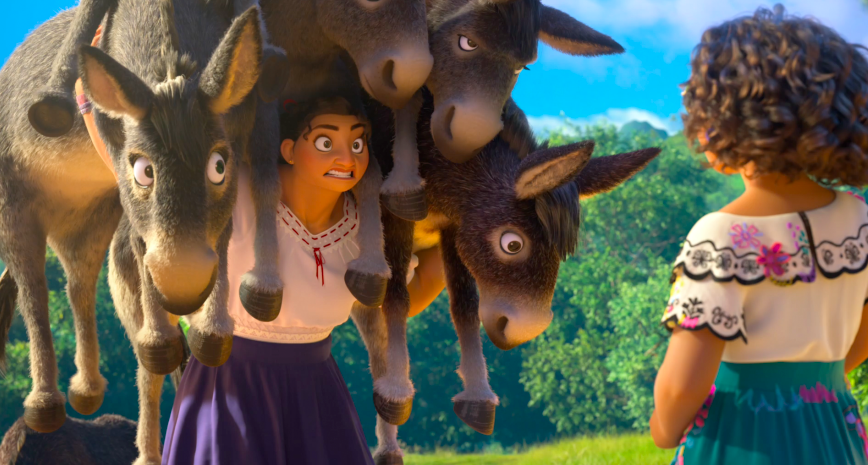 In the film, Luisa is shown lifting pianos and wagons –and donkeys – over her head. She’s described as the “rock” of the family. She has physical and emotional strength – but most importantly, she’s in a body that also looks strong and powerful, something Disney (and most other studios) has never celebrated before in their female characters.

And, maybe to Disney's surprise – kids – and adults – all over the world are loving Luisa and her muscles.

Reactions to Encanto and especially Luisa have been trending on social media ever since the movie dropped, and to a lot of women, it means finally feeling representation in a 'princess' movie. On Instagram, fitness influencer and ex-swimmer Lucy Davis dedicated a post to Luisa Madrigal, writing:

When I was younger, I always thought the Disney princesses all looked the same physique wise, with a tiny waist and being overall very thin, quite superficial.

I have had a muscly athletic physique since being a little girl & would have absolutely loved to see the character Luisa when I was growing up! The artists for Encanto had to push hard for Luisa to have big muscles. AND, from this, so many girls find her completely relatable! She looks f*cking awesome. Swipe for some article headings..

There is just something so refreshing
about someone who can bench press you in a Disney film; who looks happy and comfortable in her own skin, and who is a woman with muscle."

Another fan of the movie took to Twitter to express her love for Encanto – and Luisa:

Can we just talk about Luisa from Encanto? It’s so nice to finally a literally strong female characters without the body of a princess. No, this girl is BUFF, tall, and doesn’t have the traditional curvy body Disney uses. And it makes women like me feel seen FINALLY!!!

And as for how kids are reacting to a Disney girl who looks nothing like any other Disney girls, well, take a look:

My daughter just asked for a Luisa themed bday party and literally everything encanto has Mirabels or Isabellas face on it. And I’m not in the financial situation to have everything custom made. Disney needs to step it up w/Luisa merch.

Had to fight for Luisa's muscular frame

It seems no one is more surprised with Luisa's popularity than Disney themselves – who, as it turns out, had some serious concerns about the character's physical build while the movie was being made.

Ekren is an illustrator and character modelling supervisor who worked on Encanto, and has revealed that it was incredibly difficult to convince Disney that Luisa should forgo the petite and slim build of many other Disney women to have a muscular frame instead.

"I think we all just wanted to do it in a way that worked well with the style and really made sense for the character and I’m really proud of the way that she turned out," Ekren wrote on his Twitter account in July last year, which has since been made private.

"The entire team was so awesome. I just pushed buttons in the right order."

popular
Elf on the Shelf is actually pretty bad for your kids, according to an expert
Expert says Cocomelon acts "as a drug" to kids' brains
Prince William and Princess Kate would welcome a fourth child with open arms
4 ways to fix hard slime with ingredients you probably already have at home
Irish company create app that will send your kids messages from an Elf
Shows like Bluey and Peppa Pig are actually bad for kids, expert warns
COMPETITION: Win a 2 night family break at Castleknock hotel (worth €500!)
You may also like
3 days ago
People are accusing Netflix's new series Wednesday of being 'racist'
5 days ago
Radio station to remove homophobic slur from Fairytale of New York
2 weeks ago
Here's how much this year's I'm A Celeb stars have been paid
2 weeks ago
Legendary Aussie soap Neighbours is returning
3 weeks ago
Nick Cannon estimates how much he pays in child support
3 weeks ago
David Walliams could be removed from Britain's Got Talent following 'offensive' remarks
Next Page