Dwayne Johnson, AKA The Rock has to be the man du jour at the moment. His Instagram is filled with pictures of him doting on his wife and kids and he recently only went and gave his mum the best Christmas present ever - a house of her choosing.

Yep, he has displayed incredible kindness and compassion and although he may be an imposing 6ft 5in and 118kg, The Rock seems like a total softie.

The latest video we've seen confirms just how much of a legend he is as Dwayne surprised three children PJ, Cameron and Lucy and the whole experience was captured on camera. (Try not to cry)

The meeting was arranged by three charities, Make A Wish, Rays of Sunshine and the Starlight Foundation- all charities that brighten up the lives of sick children.

Dwayne gave the children VIP treatment on the set of his new film, Hobbs & Shaw, introducing them to cast members, giving them "one of a kind Dwayanta Claus" Christmas jumpers, Xbox consoles and he even baked them cookies! 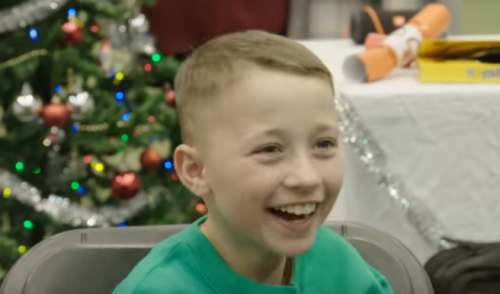 In particular Kildare native, PJ was beside himself with The Rock's generosity. Equally, 11-year-old Cameron could be heard saying "Oh my God" as Dwayne went off to get yet more presents for the kids.

"We've had a lot of rough times, so something like this is just amazing. What can I say? It makes up for all the crap we have to deal with. Seeing [Cameron] happy is what it's all about."


popular
'There will be tears': Kate Garraway says husband could be in a coma for a year due to #Covid-19
#Covid-19: Travel permitted anywhere in county, groups of six allowed to meet indoors from Monday
11 little things that mean the absolute world to your kids
Kids still got a pesky case of lice with school out? Here's how to fix it
Get ready to live like the stars because Lidl is selling an entire home cinema range
#Covid-19: International travel to return for countries where curve has been flattened
Better sleep: 5 things you need to ban from your bedroom according to an organisational expert