She will need further surgery this week.

A teenage girl has been hospitalised with serious injuries following a carjacking in Kilkenny.

It is believed the teenager, who has special needs, is in a critical condition at a Dublin hospital

The 16-year-old girl was alone in the car when it was stolen on Friday, November 18th.

Her father left her in the car on Greet Street on Friday afternoon. He left the key in the ignition so she could listen to the radio.

The young girl's father left the car momentarily to run an errand.

When he was gone, a man (30s) stole the car. The man, named as Dale Fogarty, crashed the car into another vehicle. He was removed from the scene and pronounced dead at St. Luke's General Hospital Kilkenny.

Three other people were in the other car, but their injuries are not life-threatening. 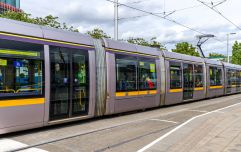 END_OF_DOCUMENT_TOKEN_TO_BE_REPLACED

According to The Independent, Fogarty was overtaking cars on a blind bend.

Gardaí have called on witnesses to come forward following the accident and carjacking.

They have asked road users with camera footage to come forward. They're particularly interested in footage from drivers who were on the N77 between Kilkenny town and Ballyragget between 3:15 pm and 4 pm.

popular
The release date for season 12 of Call The Midwife has been announced
Elf on the Shelf is actually pretty bad for your kids, according to an expert
The government has launched a new funding model for Irish childcare services
Expert says Cocomelon acts "as a drug" to kids' brains
These 5 foods could increase your chances of having twins
Former Grey's Anatomy writer says she has "no excuse" for lying about cancer
Father took daughter to hospital three times before she died of Strep A
You may also like
3 days ago
Should pit bulls be banned in Ireland? Parents express concerns after recent attacks
1 week ago
Warning to Irish public over major rise in burglaries
1 week ago
Alejandro Miszan: Fundraiser set up following vicious dog attack
1 week ago
9-year-old boy will "never be the same again" after Wexford dog attack
4 weeks ago
Teenage girl tragically killed in Letterkenny car accident
1 month ago
Gardaí arrest woman (40s) following fatal stabbing in Ballyfermot
Next Page