This Kilkenny disco is telling teenage girls how to dress

The management of Kilkenny's biggest teenage disco, The Fusion Ball, have implemented a 'dress code' for young girls attending the popular event, and both genders say the move reinforces a culture of sexism and victim-blaming.

The Fusion Ball, which is hosted regularly in Kilkenny's Pegasus nightclub, took to Facebook on Sunday to declare that female attendees' dresses should be "knee length or just above the knee" with no plunging necklines. The post went so far as to provide images of what they considered to be inappropriate for girls, based on what they said were "deplorable dresses" at the previous event. 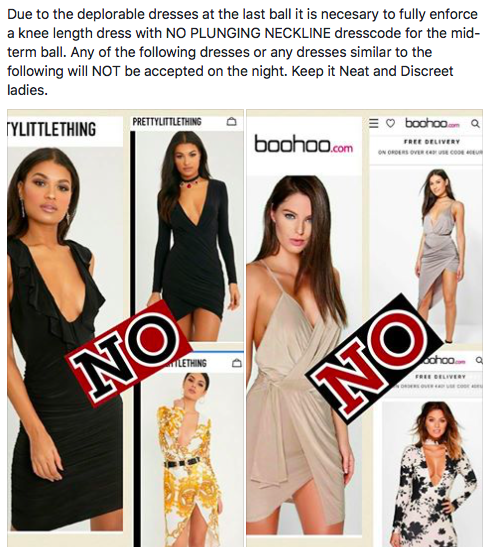 Although many mums and dads of teenage girls may privately lean towards more 'demure' styles for their daughters, attendees of both genders were not impressed. Emily Donnelly, a media studies student at DCU, told event promoters that the dress code is indicative of  female body-shaming,

"You're more than entitled to place a dress code on an event you're throwing, but the wording of your post is extremely problematic and promotes shaming female bodies. Wearing short dresses and a plunging neckline isn't deplorable, a body is a body and there isn't a problem with showing skin unless you're sexualising young girls."

Another poster criticised the wording as reinforcing victim-blaming,

"You are well within your rights to enforce a dress code on any event. The wording however is shocking, this just further reinforces victim blaming and the 'you were asking for it' mentality."

Niamh Moroney also suggested that event management should respect young women, rather than body-shaming them,

"Work with young people to change their attitudes towards sex and intoxication instead of banning natural features of women's bodies outright."

But it wasn't just the girls who noted the dress code's gender-based hypocrisy, as the opposite sex highlighted the irony of the situation: 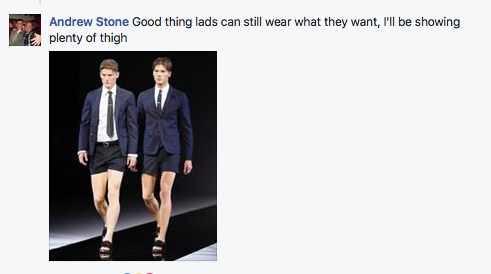 Yesterday, organisers defended their position with a separate post stating that the dress code has been in place since 2005,

"We organise these events for 15-year-old children to attend in a safe, supervised and fun environment. Our dress code has always been in place, since our first ever ball back in 2005. We put up a reminder of this before every ball and we also have it on the back of all tickets."

However, Aoife Furlong wondered if promoters had confused 2005 with 1895, commenting,

"I've ordered this instead do you think its ok?" 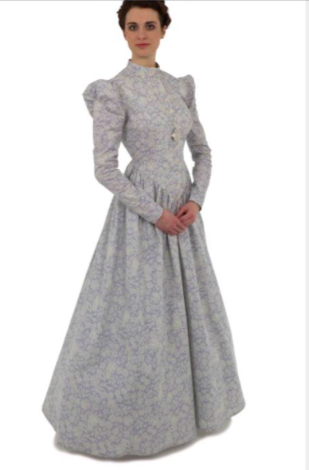 Jacqueline Healy, women's health and human rights coordinator for the National Women's Council of Ireland, told HerFamily that the policing of women's bodies and dress codes needs to stop,

"One in five women will experience domestic abuse at some time and we know that most young women have experience of sexual harassment. The focus is always on what the woman is wearing, not the perpetrator. This is dangerous as it sends the message to young women and girls that their actions and dress code are up for debate and makes them somewhat culpable. Women and girls should be able to wear what they want."

What do you think? Let us know your thoughts in the Facebook comments or join the conversation on Twitter @HerFamilydotie


popular
Boy (14) found guilty of murdering 12-year-old schoolgirl Ava White
"He will always be a danger": James Bulger's dad says son's killer should never be released
Am I a bad dad for encouraging my daughter to be a housewife?
Infant poisoned by nurse "deteriorated quickly", hospital reveals
Saoirse Ruane's mum says their family has been on an "emotional rollercoaster"
Is it fair for mum to choose which grandparent gets to first meet a new baby?
10 hotels with self catering that are perfect for a family staycation
You may also like
8 months ago
School uniforms for girls cost an average of 12 percent more than uniforms for boys
11 months ago
Got insomnia? The "sleep gap" between men and women is all too real, and here's why
1 year ago
New schools in Ireland will be given the option of having gender neutral bathrooms
1 year ago
Study finds that stay-at-home dads do much less than stay-at-home mums
2 years ago
Accessible childcare and shared parental leave needed for workplace equality
4 years ago
Senator calls for single-sex schools to be scrapped
Next Page