"She is too young": Kourtney Kardashian mum-shamed over daughter's latest TikTok

Is Kourtney in the wrong here?

Kourtney Kardashian has been called out over her daughter's latest TikTok.

The mum-of-three is being mum-shamed for letting 9-year-old Penelope wear fake nails.

Followers called her out after spotting the nails in Penelope's latest video.

Many agreed that the nails make her daughter look older than she should.

Others stressed that Kourtney is letting her little girl grow up before her time.

Many felt like the mum wasn't giving her daughter a chance to be a kid.

Over 1 million people have viewed the video, which means Kourtney has been hit with quite the wave of backlash.

One user wrote, "She’s a kid. Imagine the bag of problems this poor girl is going to have… Protect her and let her be a kid." 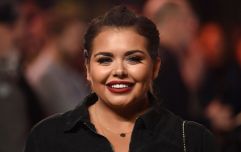 END_OF_DOCUMENT_TOKEN_TO_BE_REPLACED

"She is too young to have those nails, Kourtney!!! I don't like it," another said.

Another follower wrote, "Things that make little girls look like grown a** women is a NO."

Amongst the backlash, a lot of users defended the mum.

“My daughter would love it when I would take her to the salon and let her get her nails done along with her hair. That’s being a good mom."

“Her nails are so cute, I would have died for that at her age," another said.

Kourtney has not responded to the criticism, but she recently stressed that social media doesn't reflect her real life.

People claimed she wasn't spending enough time with her children, but she quickly clapped back at the abuse.

You may also like
1 week ago
Charlotte Crosby reveals her labour will be shown on TV
1 week ago
Olivia Newton-John's daughter shares heartbreaking video filmed before her mum's death
1 week ago
Caitriona Balfe pens moving tribute after her father's sudden death
1 week ago
Lauren Goodger assaulted and taken to hospital after daughter's funeral
1 month ago
Pete Davidson talks having a baby with Kim: ‘That’s kind of what I’m preparing for now’
1 month ago
Stacey Solomon calls out paparazzi who were stalking her on hen party
Next Page