To be honest, we'd all react the same way.

Jacqueline Jossa came out as Queen of the jungle on I'm A Celebrity... Get Me Out Of Here and while she has had to deal with some personal issue since returning to the real world, she has also had to handle new found fame.

We mean, she was famous beforehand but now Kylie Jenner knows her name.

Jacqueline appeared on Capital FM this morning to talk about life after the jungle and said that she was shocked to receive a message from Caitlyn Jenner's daughter.

She told the hosts: "I was standing next to Caitlyn at the afterparty and she was like, ‘Oh, hey give me your number.’ And I was like, ‘Oh my god! She’s asked for my number!’

"I was, like, really cas[ual] just gave it to her, thinking she’s done that cleverly so I don’t ask for hers, so I’ll never have hers." 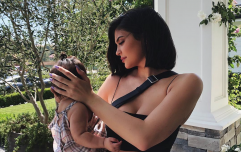 Kylie Jenner says having the baby blues is "really hard"

END_OF_DOCUMENT_TOKEN_TO_BE_REPLACED

Jacqueline continued: "And then she did the whole ‘It’s Caitlyn’ and texted me so then I had hers. And I was like, ‘Oh my god!’ just cas, cas, just save it as Caitlyn and don’t put Jenner, you know, all of that…”

"The day I got home I got a message from her, a video, and it was her just like, ‘Hey Jungle Jaq! Hope you got home OK!’ and then she was like ‘I’ve got someone here that wants to congratulate you!’

"Then literally Kylie, looking like a goddess, no make-up on either, she just looks amazing – she peered over and she was like ‘Jacqueline!’ She said my name in an American accent and it was just incredible.

"She was like, ‘Thanks for beating my dad! You’ve done so well, I’ve heard so much about you!’"

Imagine getting a message like that from Kylie Jenner? We'd be shook.

popular
"My heart sank": Tubridy hit with backlash over Toy Show remark
Parents told to stop buying selection boxes for kids- here's why
Woman gives birth to baby boy and girl less than 12 months apart
"Losing a baby is the ultimate loss, but to watch on over a video call is soul destroying"
Having an Elf on the Shelf can actually be bad for your kids
Expert says Cocomelon acts "as a drug" to kids' brains
Third child dies from scarlet fever in UK- here are the symptoms to look out for
You may also like
2 months ago
Kylie Jenner admits she hasn't legally changed her 7-month-old son's name
6 months ago
Did Kylie Jenner accidentally reveal the name of her baby boy?
6 months ago
Kylie Jenner gives first glimpse of her adorable baby boy
7 months ago
Kim Kardashian admits to photoshopping her niece True into Disneyland photos
7 months ago
Kris Jenner says she was told Blac Chyna allegedly threatened to kill Kylie
7 months ago
Kendall Jenner says her mam Kris is pressuring her to have a baby
Next Page