Lauren Goodger has opened up about how she is coping with the tragic death of her daughter Lorena. The heartbroken mum said she is still struggling following the harrowing loss but hopes to help other bereaved parents one day.

Lauren thanked her followers for their support after her daughter died from complications during birth.

The mum said that she is feeling "broken", but hopes to use this trauma to help others.

"One day I'll write my second book and tell my story to all I've been through when I'm old. And hopefully it can be someone's survival guide."

"I am strong and I will not stay down, I get back up and I keep going.

"What I've found is I'm doing all the things that I couldn't do while pregnant," she added. 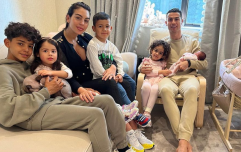 END_OF_DOCUMENT_TOKEN_TO_BE_REPLACED

Lauren said her daughter Larose is keeping her going. She said her little girl has pushed her to get up every day and continue on despite the waves of heartache she is dealing with.

"My house is spotless and I have zero washing it gets cleaned constantly... I go out every day to do a job even if it's for myself or Larose," she continued.

Lauren confirmed that her daughter Lorena died because her umbilical cord was wrapped around her neck. There were also two knots in her umbilical cord. Ten doctors fought to save her baby girl, but it was too late.

Lauren has been praised by her followers for being so honest about her grief.

If you have been affected by the issues raised in this article then you can contact Anam Cara on (0)1 4045378.