The little girl who played Baby Anna in Derry Girls has been diagnosed with leukaemia.

Four-year-old Zoe Brown from Belfast, along with her twin Sophie, played the younger sister of the show's main character Erin Quinn in seasons two and three of the hit show. 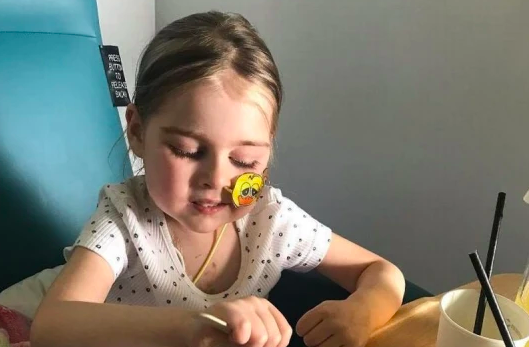 Speaking to Belfast Live, Zoe's mum Leah explains that her daughter has been undergoing gruelling chemotherapy and other treatment after being diagnosed with the disease in May.

In the space of the last few weeks, the four-year-old has undergone multiple bone marrow biopsies and lumbar punctures, and has lost her hair, which her mum says is ‘the saddest wee bit for her.’

"Zoe just had the longest, thickest hair and it was the first thing anyone talked about when they saw her," Leah explained, revealing that at the moment, her daughter is so sick from the treatments that she can no longer walk.

However, she added that they have met other little girls who have lost their hair at the children’s ward of the hospital who have ‘made her feel better.’

The four-year-old has a long road ahead her mum reveals, explaining that Zoe will require intense treatment until Christmas, and maintenance chemotherapy for two years afterwards.

This means that Zoe's twin sister Sophie will have to start primary school without her this September, but Leah says the family is ‘overwhelmed by everyone’s help and support.’

END_OF_DOCUMENT_TOKEN_TO_BE_REPLACED

A fundraiser has been set up by a family friend to help with the costs and other difficulties as the little girl battles leukaemia, with the JustGiving page describing the ‘brutal’ side effects of Zoe’s drugs.

"It’s a long road ahead so with the help of our community we can all come together and do what we can to help the family," the page reads.

Derry Girls creator Lisa McGee shared the page to her own social media, and later told Belfast Live that she was ‘so sorry’ the little girl was ill, describing her as ‘the most wonderful little girl’.

The fundraising page also reads that an in-person fundraiser will be held in Belfast in July to raise further funds for the little girl and her family ‘to help ease the pain of what they are all going through.’

Set up with an initial £500 goal, the JustGiving page has far surpassed that, currently standing at over £3,500.

popular
The government has launched a new funding model for Irish childcare services
Elf on the Shelf is actually pretty bad for your kids, according to an expert
4 ways to fix hard slime with ingredients you probably already have at home
The incredible images of en caul births will never not amaze us
Breaking: 5-year-old girl dies from Strep A in Belfast
8 incredibly annoying Christmas gifts that all parents HATE
This is why dads should never, EVER be left in charge of the Elf on the Shelf
You may also like
5 days ago
Radio station to remove homophobic slur from Fairytale of New York
6 days ago
Mysterious clumps in Christmas tree should be removed immediately
2 weeks ago
Man who exposed Jimmy Saville has a new theory about Madeleine McCann's disappearance
3 weeks ago
Spencer Matthews to climb Everest in bid to find brother's body
3 weeks ago
David Walliams could be removed from Britain's Got Talent following 'offensive' remarks
3 weeks ago
Government's five-day domestic violence leave plan criticised
Next Page