“You too?!” Little Mix’s Leigh-Anne and Perrie describe the moment they told each other they were pregnant

"We just cried our eyes out."

Little Mix's Leigh-Anne Pinnock and Perrie Edwards spoke about the moment they found out about each other's pregnancies in a recent TikTok Live interview.

Leigh-Anne, 29, announced her pregnancy with fiancé Andre Gray just ahead of Perrie, 27, who is also expecting her first child with partner Alex Oxlade-Chamberlain.

Leigh-Anne volunteered Perrie to tell the story of how the girls found out about each other's news.

"We were on a work Zoom and we were chatting about things that were coming up in the schedule because being in Little Mix, our lives are blocked out two years in advance," Perrie said.

"So I messaged my manager, Sam, and I was like, 'Sam, I need to talk to you ASAP.' And she called me straight away and was like, 'you're pregnant.' I was like, 'how'd you know that?' and she was like, 'because I am too.'

"Then she went, 'please can I add somebody to the call?' and I was like, 'no, I'm really nervous, it's very early, I don't wanna tell anybody.' And she was like, 'do you trust me?'

"So she added someone to the call and then I just hear this voice come out and she goes, 'Perrie? You too?!' and then we just cried our eyes out. We couldn't believe it!" 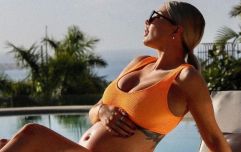 END_OF_DOCUMENT_TOKEN_TO_BE_REPLACED

The girls also shared that Jade had the "cutest reaction" and cried when they told her the news.

While rehearsing for the 'Confetti' music video as Leigh-Anne and Perrie were still disguising their pregnancies, Jade tried to throw people off the scent by pretending she was exhausted and sore too.


popular
Multiple people killed in Denmark shopping mall shooting
I tried 'slow parenting' for a year and I'm never going back
Vicky Phelan shares message of support with Charlie Bird as she deals with pain
The finale of The Babymakers had us all in bits last night
Opinion: The obsession with routines and sleep training for babies is weird – and stressful
Say it isn't so: Workin’ Moms’ to end with Season 7
The bodies of three missing children and woman found in Minnesota lake
You may also like
4 months ago
Towie's Lauren Pope announces she's expecting her second child
4 months ago
Rosie Huntington Whiteley welcomes her second child
5 months ago
"We never gave up": Shayne Ward and fiancée Sophie expecting baby #2
6 months ago
Vogue Williams and Spencer Matthews reveal the gender of their third child
7 months ago
Danielle Lloyd welcomes baby girl and Marnie Simpson announces 2nd pregnancy
11 months ago
George and Amal Clooney reportedly expecting third child together
Next Page