Love Island fans have been waiting on the edge of their seats since the series started to find out when Gemma Owen will reveal who her famous father is, but as of now, she is yet to do that.

And as the weeks go on, it's looking less and less likely that we'll ever see it, but according to one dumped islander, some of them already know.

Afia Tonkmor has returned to social media after she was dumped from the island, and she's revealing a lot from her time in the villa.

Taking to Instagram for a Love Island Q&A session, Afia was asked by one of her followers: "Do they know who Gemma's dad is?"

Replying to the burning question, she gave a blunt answer and it was a lot more disappointing than we'd hoped. 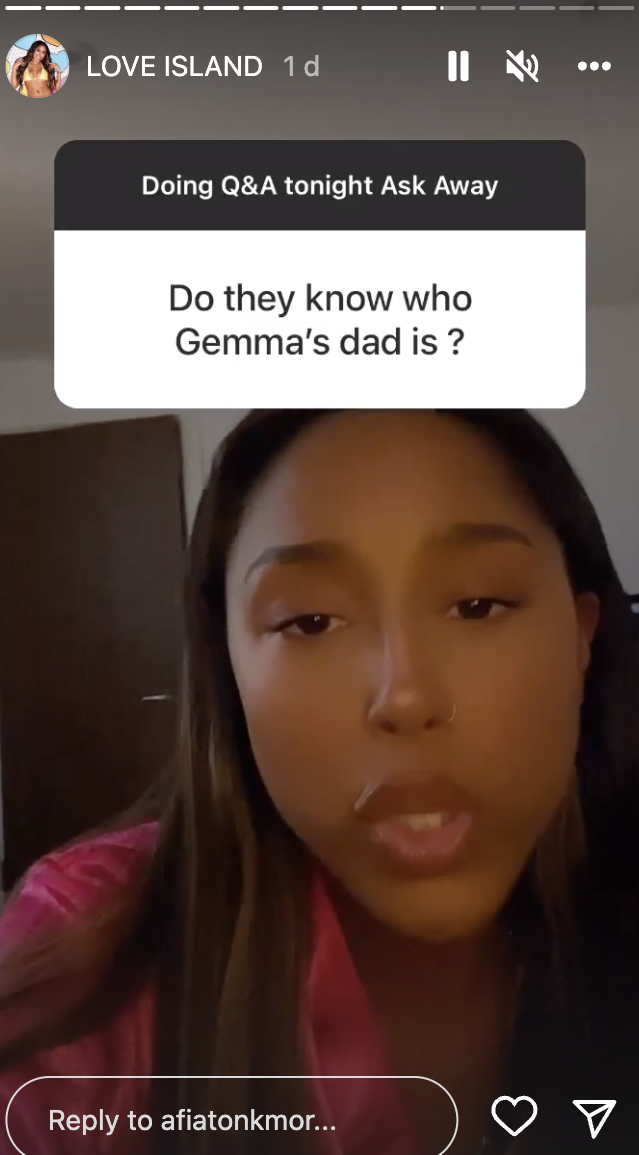 Afia said: "If people do know - I did know before I went in because I watched her VT - but if they do know they don't care, nobody really cares.

"I don't know who he is. I know he's a football guy. It was never, ever spoke about in my presence."

END_OF_DOCUMENT_TOKEN_TO_BE_REPLACED

Of course, hints have been made throughout the show as Gemma's ex boyfriend Jacques asked if her "family are ok", and obviously he knows.

She also gave a major hint when first speaking to Luca, saying: "You're sporty and you're into football, you're into racing.. you'd have stuff in common with my dad... I think he appreciates a guy who's into sport and all that kind of stuff. I hear you talking about football and racing and I'm like ooo."

Proving he didn't know at the time, Luca replied: "Yeah I enjoy playing football and I know what I'm talking about with football. We'll see if he [your dad] knows what he's talking about."

Fans of the show are now wondering if there's a reason that Gemma hasn't said who her dad is yet, and some have headed onto Reddit after they believed they cracked the code.

One fan posted the theory: "If her family paid [ ITV ] money not to air [Gemma talking about Michael] then we won’t see it. I think it’s pretty obvious that some sort of deal was struck regarding her time on the island.”

Another responded: “There’s no way someone with that much money and power enters into a competition like [Love Island] without insurance.”

popular
Bride asks for divorce day after wedding following groom's disrespectful cake stunt
Police believe they know what happened to missing dog walker Nicola Bulley
Dad admits he hates his daughter's name so much it makes him uncomfortable
Entrepreneur schoolboy has made £1,000 from selling sweets
Students given £500 after uni was unable to give them their degree certificates at graduation
Parents believe CoComelon causes tantrums and speech delays in toddlers
Couple decide to live on cruise ship permanently after finding it's cheaper than paying mortgage
You may also like
3 days ago
Dani Dyer reveals the gender of her twin babies
1 week ago
Montana Brown hints at when her baby's due date is
1 week ago
Dani Dyer reveals she's expecting identical twins
1 week ago
Tommy Fury will fly to Saudi Arabia just weeks after Molly Mae gives birth
2 weeks ago
ITV announces new Love Island spin off for middle aged singles
2 weeks ago
Love Island star Dani Dyer reveals she's pregnant with twins
Next Page