After last night's argument between Luca Bish and Gemma Owen on Love Island, his family has had to publically defend the islander.

During Tuesday's episode, the islanders took part in the Mile High-themed challenge, with the girls not holding in back as they were told to give a sexy performance for the boys dressed as cabin crew.

In the end, they pulled the boy of their choice into the "toilet" for a Mile High Club moment, but Luca was less than impressed with Gemma after her performance.

As she took her turn, the 19-year-old licked each of the boys claiming it was just a challenge, but that wasn't good enough for Luca.

After the challenge, Ekin-Su said to Gemma: “Was it me or was I seeing that Luca was being a bit weird? Like when you were doing your challenge?”

Gemma replied: “It’s really not that deep but if he’s gonna be p**** over it then he can do one.”

She eventually went to speak with Luca about it and it ended in him storming off to the front doors of the villa, despite claiming he wasn't "in a mood."

After some time apart, they aired out their differences on the terrace that evening, with Luca saying she “gave it the most” in the challenge out of all the girls and he wanted her to "behave better".

He then asked if Gemma even wanted to be with him at all, and she said "obviously." 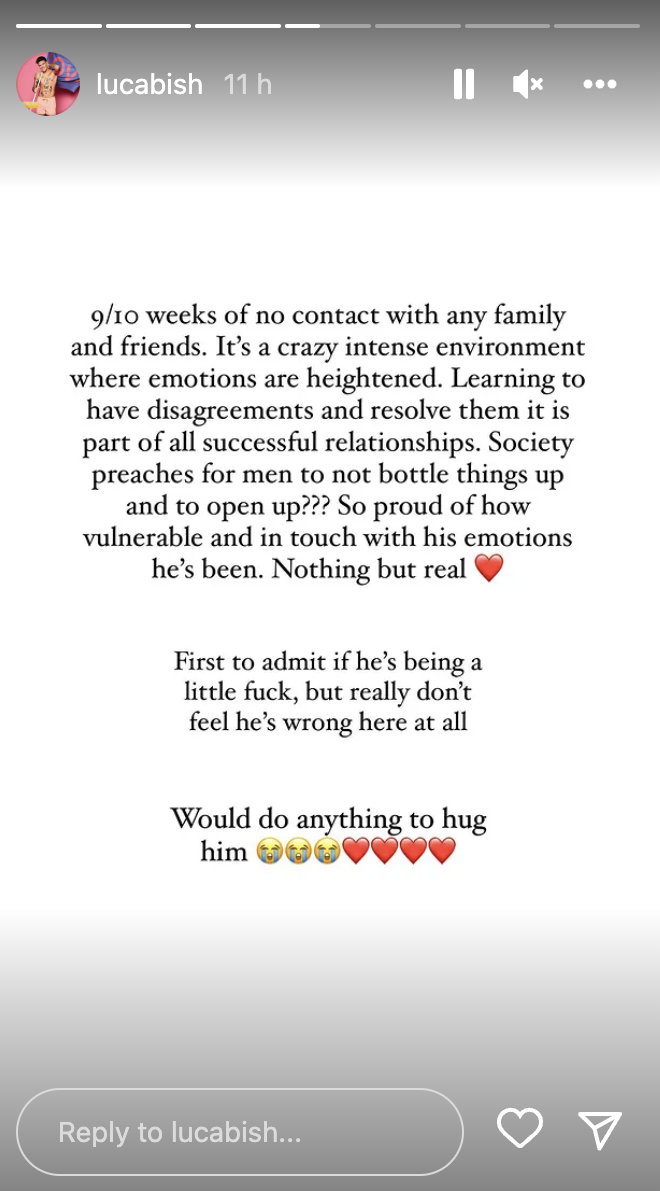 END_OF_DOCUMENT_TOKEN_TO_BE_REPLACED

While the two didn't seem to resolve their issues, they were interrupted by a sudden text to go to the fire pit for a dumping, and things were clearly still bitter between the two.

As fans of the show claimed his behaviour was jealous and controlling, Luca's sister Claudia took to his social media to defend her brother.

She wrote: “9/10 weeks of no contact with family. It’s a crazy intense environment where emotions are heightened. Learning to have disagreements and resolve them it is part of all successful relationships. Society preaches men not to bottle things up and to open up???”

“So proud of how vulnerable and in touch with his emotions he’s been. Nothing but real. First to admit if he’s being a little “f**k. But really don’t feel he’s done anything wrong here at all. Would do anything to hug him right now.”

popular
This is everything women need to know about ovarian cysts
Study says that dads get more sleep than mums and tell us something we don't know
These 40 baby names are set to trend in 2023
Bride asks for divorce day after wedding following groom's disrespectful cake stunt
Babies born in February have some pretty cool advantages – no, really – it's true
Police believe they know what happened to missing dog walker Nicola Bulley
Shows like Bluey and Peppa Pig are actually bad for kids, expert warns
You may also like
5 days ago
Dani Dyer reveals the gender of her twin babies
1 week ago
Montana Brown hints at when her baby's due date is
1 week ago
Dani Dyer reveals she's expecting identical twins
1 week ago
Tommy Fury will fly to Saudi Arabia just weeks after Molly Mae gives birth
2 weeks ago
ITV announces new Love Island spin off for middle aged singles
2 weeks ago
Love Island star Dani Dyer reveals she's pregnant with twins
Next Page