Michael Buble and his wife Luisana expecting their fourth child together

Michael Buble and his wife Luisana's family is about to get a lot bigger.

The couple are reportedly expecting their fourth child together.

Luisana stars in the Canadian singer's latest music video for his song 'I'll Never Not Love You'.

In a clip from the video, the actress can be seen with a baby bump.

TMZ revealed the news after obtaining a clip from the video which is due to be released this week.

The couple has yet to publicly address the news.

The new music video is a sequel to Haven't Met You Yet. The couple famously met on the set of Buble's music video and quickly fell in love after. 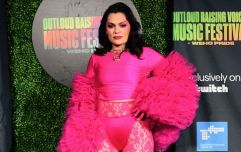 "Pregnancy is not a competition": Jessie J calls out followers over inappropriate comments

END_OF_DOCUMENT_TOKEN_TO_BE_REPLACED

Speaking of working with her husband again, Luisana said: "You can’t imagine how happy and glad I feel about working with Mike."

"Spending 3 days with him on set. I admire him so much, he is the #1 in everything he does, so professional!

"Thank you mi amor for always trust in me and being my best friend.

She said the Cry Me a River singer always makes her feel like "a great woman, actress, and mom".

"You encourage me to be always the best person."

Buble teased, “Haven't Met You Yet" was the beautiful start of a true romance. 10 years later, the story continues in the extraordinary sequel “I’ll Never Not Love You."

46-year-old Buble and the Argentine actress are already parents to three children.

Congratulations to the couple on their growing family.

popular
This is everything women need to know about ovarian cysts
Viewers in tears after last night's emotional episode of DIY SOS
Babies born in February have some pretty cool advantages – no, really – it's true
These 40 baby names are set to trend in 2023
Study says that dads get more sleep than mums and tell us something we don't know
Bringing a dog to work can increase morale and productivity, says DSPCA
Police believe they know what happened to missing dog walker Nicola Bulley
You may also like
8 months ago
Kelly Osbourne reveals she's pregnant with her first child
9 months ago
Britney's fiancé Sam Asghari speaks out about her pregnancy
11 months ago
Alexandra Burke reveals she is expecting her first child with Irish footballer
11 months ago
Danielle Lloyd was "devastated" after doctors told her she was expecting another son
1 year ago
Rihanna is "so excited" to become a mum for the first time
1 year ago
Dani Dyer slams fan for speculating about pregnancy
Next Page