Former Love Island star Montana Brown has hinted at when her baby's due date is.

After making a name for herself on Love Island back in 2017, the influencer announced she was expecting her first child on Christmas Eve with boyfriend Mark O'Connor.

Now, it appears that Montana has hinted at her due date. She had previously only revealed that her new addition would be welcomed in the summer of 2023.

Taking to Instagram on Tuesday, the 27 year old shared an array of photos that showed off her growing baby bump.

Along with the photos, she wrote: "18 weeks ft my mysterious belly button which was pierced for 6 months at age 16 and the scar never disappeared.” 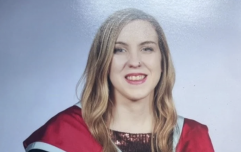 END_OF_DOCUMENT_TOKEN_TO_BE_REPLACED

It didn't take long for fans to do the maths and figure out that if she is 18 weeks along, she should be due to have her baby sometime in the last two weeks of June.

Last month, Montana opened up on her struggle to get pregnant following her exciting baby news.

Revealing that it "took longer than it should" for her to have gotten pregnant, she opened up about her secret health battle.

Speaking on an Instagram Q&A, one follower asked if her pregnancy was "planned", to which she responded: "@pippacampbell_health did all these amazing tests which was really insightful and helped me understand why it was taking longer than it should.”

Speaking more about it on her story, she revealed that she and her partner Mark O'Connor has been "trying for a little bit" before she discovered she was expecting.

She said: "I guess the main thing that was important which I wished I had done a bit earlier was the hormone test."

popular
Shock after baby is discovered alone in pram late at night in Dublin
Stacey Solomon's fans think they've figured out her baby's name
HSE issues advice for parents if their child starts choking
Expert says Cocomelon acts "as a drug" to kids' brains
Can you pronouce these 7 'unique' baby names? They're trickier than you think
Conor McGregor hit by car ‘at full speed’ while cycling
Gemma Atkinson slams trolls who accused her of having baby with another man
You may also like
1 month ago
Woman gives birth to baby boy and girl less than 12 months apart
6 months ago
Have we been doing it wrong? The safest way to wear a seatbelt correctly when you are pregnant
6 months ago
Social experiment finds pregnant women regularly refused the use of public toilets
7 months ago
Due in July? Science says babies born this month have three amazing advantages
7 months ago
Man refuses to give up seat for pregnant woman because of long working hours
7 months ago
Me and my mother-in-law are pregnant at the same time, things are getting complicated
Next Page