She said it was worth the fine and disruption to her daughter's education.

A mother has been fined after she took her daughter out of school so they could go on holiday.

The mum claims she did nothing wrong by removing her daughter from school.

She also said the holiday was more educational than her school lessons.

According to Hull Live, the mum was fined £60 for taking her daughter out of school.

However, she said it was worth it because her daughter was "educated in the Spanish language and culture" during their holiday.

Her mum claims this is something she never would've been exposed to in a classroom.

The girl's mother Bekki said she travelled during school time because it was more affordable. 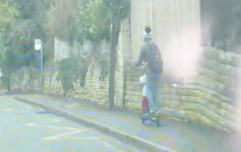 END_OF_DOCUMENT_TOKEN_TO_BE_REPLACED

She agrees that education is important, but stressed that her family genuinley needed a break after two years of living through a global pandemic.

Unfortunately, they couldn't afford to travel during peak times so they decided it would be best to take the kids out of school.

Bekki shared on Facebook: "She learnt so much about Spanish culture, learnt some Spanish and tried lots of new foods.

"Secondly, the £60 fine didn't come close to the savings I made. I wouldn't have been able to go if not during term time."

Do you agree with the mum? Or was she wrong for taking her daughter out of school?

popular
Babies born in February have some pretty cool advantages – no, really – it's true
'He's a changed man': Woman marries her 'high school bully'
11 of the best fun playgrounds in Dublin
'Vile' TikToker blasted for comparing disabled kids to vegetables
These 40 baby names are set to trend in 2023
We have St. Brigid to thank for our new bank holiday, but who exactly was she?
Expert says Cocomelon acts "as a drug" to kids' brains
You may also like
4 days ago
Entrepreneur schoolboy has made £1,000 from selling sweets
1 week ago
Redhead girl stabbed with scissors at school 'because of colour of her hair'
1 week ago
Teacher helps pupils change gender identity without their parents permission
4 weeks ago
"They do enough in school": Irish parents call for an end to homework
1 month ago
21 school children injured after two dogs attacked their playground
1 month ago
Schools will remain open this week despite cold snap
Next Page