When are ads being introduced on Netflix? Here's what we know

It looks like our Netflix and chill days won't be so chill soon, as the platform could be introducing ads before the end of the year.

Netflix said it may bring in its lower-priced ad-supported tier by the end of 2022 - according to anonymous employees, who say they received a note from the company outlining the details.

They told The New York Times that the streaming giant plans to do this in the final three months of the year.

It will also begin to crack down on password sharing around the same time.

Sources say the note also referred to some of Netflix’s competitors, like HBO and Hulu, for being able to "maintain strong brands while offering an ad-supported service".

"Every major streaming company excluding Apple has or has announced an ad-supported service," said the note. "For good reason, people want lower-priced options."

While Netflix announced it would be introducing ads earlier this year, it was not expected that it would happen this fast.

The rush to introduce ads could to be an attempt to win back customers, as the company reported losing 200,000 subscribers globally in the first quarter of 2022. It's predicted it will lose 2 million more this spring. 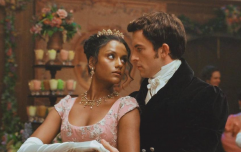 END_OF_DOCUMENT_TOKEN_TO_BE_REPLACED

“One way to increase the price spread is advertising on low-end plans and to have lower prices with advertising,” he said.

“Those who have followed Netflix know that I’ve been against the complexity of advertising and a big fan of the simplicity of subscription. But as much as I’m a fan of that, I’m a bigger fan of consumer choice.

"Allowing consumers who would like to have a lower price and are advertising-tolerant get what they want makes a lot of sense.

"So, that’s something we’re looking at now, we’re trying to figure out over the next year or two. Think of us as quite open to offering even lower prices with advertising as a consumer choice.”


popular
Meghan Markle visits Texas school shooting memorial
Doctor warns women not to follow Kourtney Kardashian's fertility advice
"Back where she belongs": Saoirse Ruane leaves hospital after 9 days
The reason why mums wake up when babies cry and dads stay asleep is interesting
Bridgerton star reveals she has been hospitalised with mental health issues
Husband of Texas shooting victim Irma Garcia dies of fatal heart attack
Toddler drowns in swimming pool while on holidays in Spain
You may also like
5 days ago
Netflix releases trailer for Umbrella Academy season 3 starring Robert Sheehan
6 days ago
Netflix's Heartstopper has been renewed for 2 more seasons
1 week ago
Netflix announces the storyline for season 3 of Bridgerton
1 week ago
There's a reason why we didn't see this Bridgerton couple get married on screen
1 week ago
Bridgerton has replaced one of its original cast members
2 weeks ago
3 new family friendly additions to Netflix for the kids to watch this weekend
Next Page