Scarlett Johansson and Adam Driver star as Nicole and Charlie, a conflicted married couple who are on the verge of a divorce.

The teasers have each half of the couple talking about what they feel are the other's best qualities.

“What I love about Nicole: She’s a great dancer, infectious, she’s a mother who plays — really plays,” Driver's Charlie says, as scenes of Nicole play out on screen.“She gives great presents. She’s competitive. She knows when to push me and when to leave me alone.” 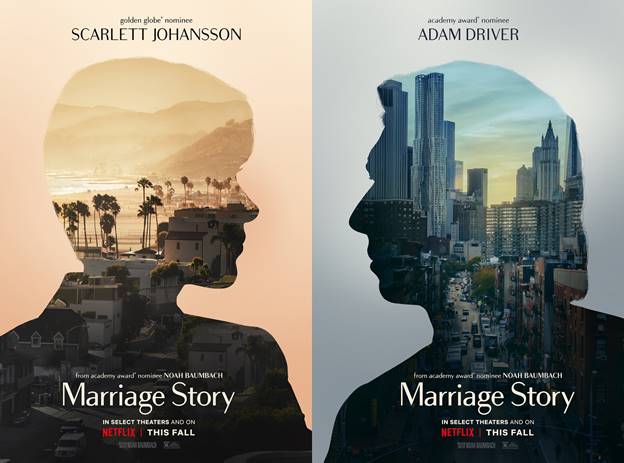 "What I love about Charlie, he loves being a dad - it’s almost annoying how much he likes it," Johansson's Nicole says in her own trailer. “He cries easily in movies. He’s very competitive. He’s very clear about what he wants. He’s a great dresser. He never looks embarrassing, which is hard for a man. He takes all of my moods steadily and he doesn’t make me feel bad about them. He rarely gets defeated, which I always feel like I do.”

Both of the previews end with Nicole sitting down in from of Charlie, telling him she thinks they should talk - but he admits "I don't know how to start."

Marriage Story will be released on Netflix later this autumn. You can check out the teasers below.


popular
Unstructured play is vital for kids, so we need to stop entertaining them
The Dutch have an amazing parenting tradition that could just make our lives a lot easier
Secondary infertility: The little-known issues surrounding the inability to conceive again
'Soak it all in' – the words about parenting that will make you embrace even the hard days
Doctors were shocked to find baby boy born clutching his mum's contraceptive coil in his hand
The 30 baby names that are going to be super popular in 10 years time
The top baby names (so far) of 2020 are in – and we have spotted a trend
You may also like
4 days ago
Dead To Me will be back for a third and final series
2 weeks ago
The first trailer for Netflix's The Baby-Sitters Club reboot is here
1 month ago
Angus, Thongs, and Perfect Snogging is dropping onto Netflix next month
1 month ago
The Big Flower Fight: The wholesome new series we're binging on Netflix
1 month ago
11 classic kids TV shows that you can watch on Netflix, YouTube and DisneyPlus
2 months ago
The official trailer for season 2 of Dead To Me has landed and it looks amazing
Next Page