The new measure is believed to be one of the first of its kind worldwide.

Working mothers and their partners in New Zealand are now allowed to take paid bereavement leave if they suffer a miscarriage or still birth.

It comes after the country's parliament on Wednesday passed the Bereavement Leave for Miscarriage Bill, enabling mothers and their partners three days leave in such circumstances.

Prior to this, bereavement leave in New Zealand was provided after an employee experienced the death of a child but the law did not make clear whether this included unborn children or developing embryos.

Parents planning to adopt a child and parents having a baby through surrogacy are now also entitled to bereavement leave on the unplanned end of the relevant pregnancy.

Labour MP Ginny Andersen, who presented the bill, told parliament before it was approved: "We are fortunate enough to have many decent employers in this country who are already allowing bereavement leave to be taken in the event of miscarriage or still birth. 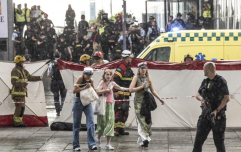 Copenhagen shooting: Two of the victims were only 17-years-old

END_OF_DOCUMENT_TOKEN_TO_BE_REPLACED

"That is callous and that is wrong".

She added: “The grief that comes with miscarriage is not a sickness.

Andersen said the bill would allow parents to come to terms with their loss.


popular
Expert says Cocomelon acts "as a drug" to kids' brains
RTÉ's Eileen Whelan recalls "stressful" IVF journey
Toddler dies after falling from balcony in New York
Parents warn new children's app is "basically Tinder for kids"
Shows like Bluey and Peppa Pig are actually bad for kids, expert warns
26 Amazing Irish Glamping Sites for Your Family Staycation
4 ways to fix hard slime with ingredients you probably already have at home
You may also like
18 hours ago
Two women killed in shark attacks near popular tourist beach in Egypt
1 day ago
Multiple people killed in Denmark shopping mall shooting
1 week ago
Man reveals he spent an hour trying to save Irish girl (7) in Majorca
1 week ago
5-year-old boy tragically dies after being left in car in extreme heat
1 week ago
Baby boy tragically dies after being left in hot car for hours
2 weeks ago
Young boy found alive after being trapped in well for four days
Next Page