Baby joy for the singer and actress.

Huge congratulations are in order for Nick Jonas and Priyanka Chopra who have become parents.

The couple announced the joyous news on Instagram this evening.

The singer and actress welcomed their baby via surrogacy.

The pair published a joint statement on Instagram to confirm the news.

Nick and Priyanka have yet to disclose their baby's name or sex.

However, according to reports from TMZ, the couple has welcomed a daughter.

"We are overjoyed to confirm that we have welcomed a baby via surrogate," the new parents shared. 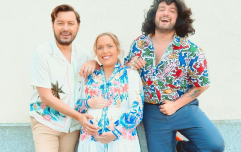 END_OF_DOCUMENT_TOKEN_TO_BE_REPLACED

"We respectfully ask for privacy during this special time as we focus on our family. Thank you so much."

Earlier this month, actress Priyanka told Vanity Fair she has always dreamed of having a family.

“They’re a big part of our desire for the future. By God’s grace, when it happens, it happens,” the new mum shared.

The 39-year-old quipped, "We're not too busy to practice.”

The Wihte Lotus star said she has no problem with pausing her career to focus on family.

Sources close to the couple said Jonas was completely "obsessed" with his now-wife.

The couple went on to marry later in December 2018.

Priyanka and Nick married in both a Hindu and Western ceremony in Jophur, India.

They even had three wedding receptions with two taking place in Mumbai, India, and another in New Dehli.

Nick Jonas recently revealed they worked really hard to create a "safe haven" for them and their loved ones.


popular
Woman hit by a motorbike in Dublin city fighting for her life in hospital
Meghan Markle visits Texas school shooting memorial
The reason why mums wake up when babies cry and dads stay asleep is interesting
Doctor warns women not to follow Kourtney Kardashian's fertility advice
Husband of Texas shooting victim Irma Garcia dies of fatal heart attack
"Back where she belongs": Saoirse Ruane leaves hospital after 9 days
Teenage girl in critical condition after horror Waterford crash
You may also like
1 month ago
Glee's Lea Michele says she'll carry co-star Jonathan Groff's baby if he wants kids
2 months ago
Rosanna Davison says surrogate has "no way of getting out" of Ukraine
2 months ago
Four Irish babies born through surrogacy in Ukraine evacuated safely
2 months ago
Hotels are the "obvious option" for refugees as four Irish babies remain in Ukraine maternity hospitals
3 months ago
Glee star Becca Tobin welcomes baby boy and his name is so unique
3 months ago
Helen McEntee advises Irish parents using surrogates in Ukraine not to travel
Next Page