An old man and his kitten recently survived a house fire that burned the man's home to the ground.

Ali Mese was trying to light his stove using gasoline last week when he accidentally started a fire that destroyed his home.

The Turkish man, his wife, and his son were all rescued from the blaze, but it was an image of Mese and his pet kitten that grabbed the attention of people around the world.

The 83-year-old man and 'Sarikiz' the kitten were photographed by local media after being rescued from the blaze.

The image is just heartbreaking.

'Sarikiz,' which means 'blonde girl' in Turkish was the only cat who made it out of the fire alive.

Local news source Anadolu Kedisi reports that Mese had many cats and hens living in his home before the fire broke out.

After firefighters rescued him and his family, Mese was taken to hospital and treated for minor burns.

He was later reunited with Sarikiz who had received many gifts through donations, including a cat bed and a carry cage.

Local authorities and assistance funds are banding together to help Mese and build him a new home. 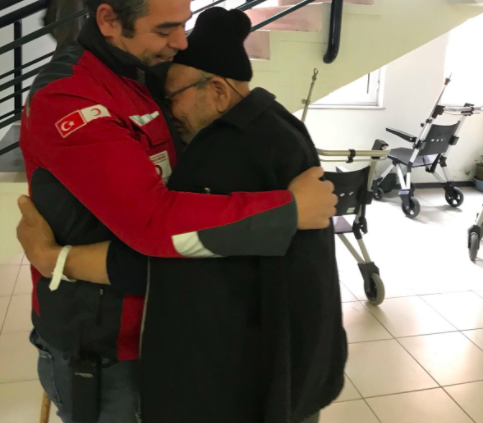 popular
Today FM's Paula MacSweeney welcomes baby boy
Hilary Swank, 48, reveals she is pregnant with twins
Primark reintroduces female-only fitting rooms after incident at one store
Shows like Bluey and Peppa Pig are actually bad for kids, expert warns
20 Unisex Irish Baby Names That Are Absolutely Magical
42 absolutely BEAUTIFUL baby names inspired by our favourite romantic movies
Mum asks for advice after mother-in-law walks around naked in front of kids
You may also like
1 week ago
Tayto Park has been renamed Emerald Park
1 week ago
Why Cuba's redefinition of the family is so significant
1 week ago
Extra child benefit, IVF and free GP care: Key takeaways from Budget 2023
1 week ago
Son sues parents for throwing out his porn collection... and wins
1 week ago
Budget 2023: Parents will not have to pay for primary school books from next year
1 week ago
Hilaria and Alec Baldwin welcome baby #7 together: 'We are overjoyed'
Next Page