The Greatest Showman was basically the movie this year.

Despite being released around Christmas last year, the Hugh Jackman starring musical held on in cinemas well into 2018 - making more than €1 million every week until March.

Which is why we were particularly excited when we found out that one of the stars of the film was going to be on The Late Late Show this weekend.

Keala Settle, who stole the show in her role as the bearded lady, will be joining Ryan Turbidy to talk about her newfound international fame and recording her new album.

And, of course, she will be performing the hit song from the film, This Is Me.

Elsewhere in the show, Ryan will be joined by comedian, actor, writer, musician and - of course - Monty Python legend Eric Idle.

The pair will be looking on the bright side of life as he talks about being one of the most iconic comedy groups in the world - and why it’s unlikely that the Pythons will be getting back together again.

Four time All-Ireland winner Cora Staunton will be on the couch to chat about scaling the heights of Ladies GAA having started playing for the Mayo Senior team at just 13 years of age, before going on to take eleven All-Star Awards and be the first international draft signing in the Australian Women’s Football League. 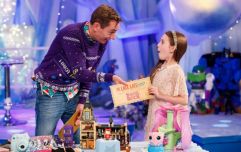 END_OF_DOCUMENT_TOKEN_TO_BE_REPLACED

Shauntelle Tynan was diagnosed with a rare form of cancer at just 16 years old. After eight months of chemo with little success, her mother Leona started the mammoth task of raising €600,000 so Shauntelle could take part in US clinical trials that had the potential to save her life.

Having been in Texas for the last year, she returned to Ireland earlier this week after being declared cancer free. She will be joining Ryan to share her incredible story.

TV presenter Hector hEochagáin’s unique travel documentaries have taken him – and the Irish language – all around the world.

He will be chatting to Ryan about his new series, Hector Ó Siberia Go Saigon, where he made the journey from sparsely populated Siberia to the urban sprawl of Saigon meeting the locals and some of the Irish people who have made their homes in the unlikeliest of places.

Diarmaid Gavin will also be on the show to talk about going back to the basics with his new project; why millennials are mad about cacti; and how he overcame his crippling shyness.


popular
Apparently there are 5 different types of grannies, and which one do your kids have?
Kristen Bell reveals the potty training hack that finally helped get her daughter out of nappies
Here is why you should always take a picture of your oven before you go on holidays
An open letter to my daughter's creche – and all the people who cared for her
Your baby's car seat might have ONE secret feature you haven't discovered yet
The funny (and brutally honest!) baby cards that are perfect for new parents
10 IRL struggles only breastfeeding mums will be able to relate to
You may also like
2 months ago
Brendan Gleeson, Samantha Barry, Dermot O'Leary lead The Late Late Show lineup tonight
3 months ago
The lineup for tonight's Late Late Show has been revealed
7 months ago
Here's the full lineup for this week's episode of The Late Late Show
7 months ago
Here are the guests on this week's Graham Norton and Late Late Show
8 months ago
Andrea Corr praised for opening up about her five miscarriages on Late Late Show
8 months ago
This week's Late Late Show boasts top Irish and international guests
Next Page