The actor said it was his most "impactful" day in Ireland.

This summer's favourite honorary citizen, Patrick Dempsey, made a very important visit during his last day in Ireland.

The Hollywood star, who has been in the country filming the sequel to Disney's Enchanted, stopped by the Purple House Cancer Support Centre in Bray.

Sharing a picture of the building on Instagram, the Grey's Anatomy star wrote: "My final and quite possible most impactful day in Ireland."

In the next shot, he posed with staff members outside the centre. In the caption he wrote: "Grateful for the work they do everyday to support those affected by cancer."

He added that he felt very "at home here". 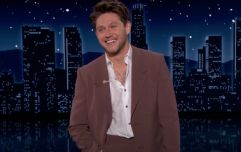 Niall Horan clears some things about Ireland up for “misinformed” Americans

END_OF_DOCUMENT_TOKEN_TO_BE_REPLACED

The Purple House Cancer Support Centre provides a range of support services for people who are affected by cancer. The organisation shared that they were "delighted" to welcome him, and to share information on how Purple House and Patrick's own organisation, The Dempsey Center, can support cancer patients and their family members.

Cancer care and support is a cause that is very close to Dempsey's heart. After losing his mother Amanda to the illness, the star established the Patrick Dempsey Center at Central Maine Medical Centre in Lewiston. In 2009, he raised over $1 million for the centre through the Dempsey challenge, a cycling, walking and running event.

This important visit marked the end of the actor's stay in our country. Dempsey wasted no time in exploring some of Ireland's most beautiful regions during his down time. Throughout his travels, he toured Glendalough, IMMA, Trinity College Dublin, Innishmore, Ashford Castle and the Cliffs of Moher.

Naturally, the actor has been quite vocal of his love for Ireland. He recently shared a selfie on Instagram and captioned it: "I love being in Ireland, and I'm having so much fun working on this film."


popular
The Bodyguard set to return for a second season
Opinion: Taking Communion out of school system will sort the believers from the non-believers
Mum sparks debate after banning her son's bully from birthday party- was she wrong?
As a parent I'm not sure how I feel about going back to the office once lockdown ends
Mum issues warning to parents after son's bruises led to cancer diagnosis
Dear Americans: Not only do we have Halloween in Ireland, we invented it
Smyths Toys Ireland issues warning to parents ahead of Christmas
You may also like
1 month ago
Ireland to become warmer and wetter due to climate change
1 month ago
No kids allowed: Is Ireland actually a 'child friendly' country?
1 month ago
This Family Travels: Our amazing stay in a renovated 19th century church in Waterford
1 month ago
Things to do in Limerick and Clare with kids
2 months ago
11 of the best fun playgrounds in Dublin
2 months ago
Things to do in Donegal with kids: fun activities for the whole family
Next Page