We are here for it.

Kids around the globe love keeping up with Peppa Pig and her family and many animal friends.

There is Zoe Zebra, Rebecca Rabbit and Pedro Pony – and now a brand new character has been added into the mix – in the form of Penny Polar Bear.

What makes Penny somewhat special is that her family consists of two mums, making them the first same-sex couple of the popular children's TV show. 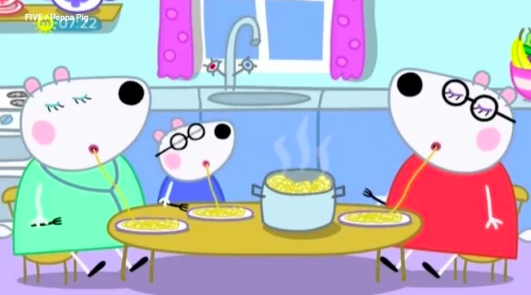 In an episode titled Families, which aired on Channel 5 earlier this week, Penny introduces her two mums to the titular character.

Penny is sketching a portrait of her family along with Suzi Sheep and Danny Dog, when she says: ‘I’m Penny Polar Bear. I live with my mummy and my other mummy.

‘One mummy is a doctor and one mummy cooks spaghetti. I love spaghetti.’

The introduction of Penny and her mums are a while coming, as back in 2019 a petition was launched calling for a same-sex parent family to be introduced to the show, which picked up almost 24,000 signatures.

As well as that, UK politician Norman Lamb also called for Peppa Pig to feature more gay characters in an interview with PinkNews.

When asked specifically if Peppa Pig should have more LGBTQ+ animals, he replied that it should not be ‘out of bounds.’

"If we’re not, it still tells that teenager, who is struggling to come to terms with her sexuality, that there is something not quite normal about how they feel."

To be fair, Peppa Pig has been previously hailed as a ‘gay icon’ and embraced by the LGBTQ+community in the wake of the release of the first Peppa Pig album.

Fans noted several aspects of the album nodded to LGBTQ+ rights, including a song called Rainbow, where the track caused one person to proclaim: ‘Peppa Pig said gay rights,’ while another person noted that the ‘fans also like’ section of Spotify featured a lot of LGBTQ+-friendly artists including SOPHIE, Slayyyter and Rina Sawayama.

popular
Parents told to stop buying selection boxes for kids- here's why
People are realising what the red Christmas lights are actually for
Opinion: He may be a politician, but Leo Varadkar's personal life is none of our business
Expert says Cocomelon acts "as a drug" to kids' brains
Kelsey Parker: "People think I should be walking around wearing my black veil"
"Losing a baby is the ultimate loss, but to watch on over a video call is soul destroying"
4 ways to fix hard slime with ingredients you probably already have at home
You may also like
4 days ago
Radio station to remove homophobic slur from Fairytale of New York
5 days ago
Mysterious clumps in Christmas tree should be removed immediately
2 weeks ago
Man who exposed Jimmy Saville has a new theory about Madeleine McCann's disappearance
3 weeks ago
Spencer Matthews to climb Everest in bid to find brother's body
3 weeks ago
David Walliams could be removed from Britain's Got Talent following 'offensive' remarks
3 weeks ago
Government's five-day domestic violence leave plan criticised
Next Page