Actress Helen George, who plays Trixie Franklin, was on This Morning earlier today to chat about the new series.

During Helen's interview on the popular breakfast show, she chatted about new additions to the cast, in particular, that of Miriam Margolyes.

Before securing the gig, Miriam was an avid fan of Call the Midwife and in previous This Morning interviews, Holly and Phillip joked about addressing producers directly to try and get her a role.

In May 2018, she did a phone interview with the hosts, announcing she was to join the cast for the eighth series. She said the news was "such a thrill" and "came out of the blue".

Phillip joked to Helen during her interview that This Morning should claim credit for her new role. Helen attested that Miriam has made a great new addition and that her "blue mouth" both shocks and entertains - burly crew members have often been embarrassed at some of the jokes Miriam has told, Helen said.

Fans of the show are eagerly awaiting the Christmas special episode, which was actually shot in April when there was a heat wave! 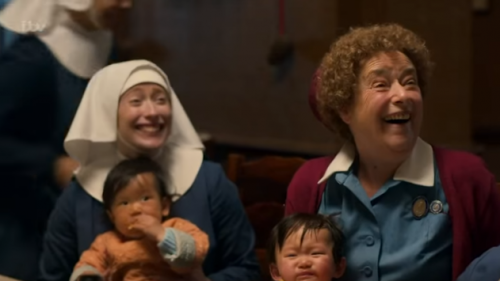 The new series is set well into the 1960s and will highlight the burgeoning women's rights movements. Helen told Phillip and Rochelle:

"Trixie spearheads a campaign to have the first smear tests in Poplar, so you see all of that happening with a modern eye, you don’t really realise when that happened but it was the 60s.

We have a continuous story about abortion, so what is great about the writers is they often shine a mirror to society, so we have the abortion situation in Ireland and we shine a light on abortion here, from backstreet abortions in Call The Midwife in the 60s, and whether that was right, the religious aspect of it, the legal aspect as well, so that is a fascinating thread."

Call the Midwife is on Christmas Day at 7.45pm on BBC One...tissues at ready, we'd say!


popular
Investigation into the discovery of a body of a male, Drumcondra, Dublin
This mum's post about dying to send her kids back to school is too funny
Planning your next getaway? Here are 6 fun family activities to try this summer
Musings: I think 'Lawnmower' parenting is damaging for children
Actor Anne Heche rushed to hospital after car crash
Tasha's dad responds to Jacques' Instagram video
Lauren Goodger assaulted and taken to hospital after daughter's funeral