Looks like we could be in for a few scorchers over the next 10 days.

A well-known and very reputable Irish weather forecaster has predicted temperatures of up to 25 degrees in what is expected to be a much welcome spell of fine weather next week.

Alan O'Reilly from Carlow Weather said that the weather may be a bit cooler today and tomorrow, particularly in the south of the country, but is set to improve into the weekend and across the coming week.

"It looks like next week the temperatures will steadily increase and we could be into well above 20 degrees by later next week. Maybe 23, 24 degrees, possibly even reaching 25 degrees later next week," O'Reilly told JOE.

"It's hard to go beyond 7-10 days, but we have the Azores high which looks to be heading our way, which there is general agreement on the weather models that it is going to become more settled and warmer next week.

"How long it will hold for does remain a little bit unclear at the moment. The 7-10 day period does look like it's going to warm up nicely."

O'Reilly added that the weather is also likely to remain warm with a very nice bank holiday on the cards for most parts of the country.

"It's going to be 17 to 18 degrees in some parts today, a bit cooler in the south. But, it's not going to be a bad bank holiday weekend. There might be some showers, especially on Saturday, but still getting up to 18 maybe even 19 degrees," he added.

"It's going to be a pleasant bank holiday and there will be some nice sunny spells at times. It won't be clear blue skies, but showers look like they will be mainly on Saturday, and then the odd one on Sunday or Monday. But, generally, I think a lot of areas will hold dry.

The main two weather models ECMWF and GFS both showing Azores High pushing up in 10 days time. 10 days is a long time in weather forecasting but when both agree it helps give us confidence. It is looking good with warm settled weather but can change so it’s wait and see for now🤞 pic.twitter.com/Gj8PubIBiU 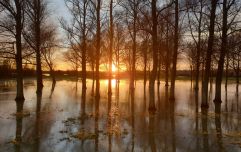 Ireland to become warmer and wetter due to climate change

END_OF_DOCUMENT_TOKEN_TO_BE_REPLACED

The Azores is an area to the south west of Ireland off the west Coast of Portugal, which can impact Ireland by blocking out the weather from the Atlantic.

"When high pressure builds there, it can move up and what it does is it blocks out the Atlantic. So, we normally get our weather influence from the Atlantic and we get the bands of rain moving in from the west and southwest so the Azores high basically blocks all of that.

"It can also then help to draw up much warmer air from Spain and from Africa. Now, it depends on where the Azores high gets positioned so if it's kind of out to the west sometimes, it doesn't get quite as warm, but, if it comes up over it then we can see some really warm temperatures and some really settled dry weather."

The forecaster added that while it's unknown exactly how long the warm weather will last, it could remain in place for weeks.

"Sometimes it can last for quite a while, it doesn't always, but sometimes the Azores high can kind of stay there and block out the weather for weeks really," he said.

"Now, that's uncertain if that's going to happen this time, but it's much better to see an Azores high coming than to see low-pressure systems coming from the Atlantic."

Met Éireann has also said that any showers and spells of rain are set to end this week, with the driest spells over the eastern half of the country, gradually turning drier through the weekend.

As for next week, the forecaster says that current indications suggest that there will be a good deal of dry weather too earlier in the week amid some rain and showers, with temperatures expected to increase throughout the week, reaching the high teens or low 20s.


popular
Woman hands herself in after allegedly killing newborn and claiming she miscarried
20 Unisex Irish Baby Names That Are Absolutely Magical
This baby casually eating noodles puts our chopstick skills to shame
Level 5: 10 really cool colouring pages to print and colour in from Pinterest
"It will haunt me for the rest of my life": Mother and daughter die from Covid within days of each other
Denise Richards "saddened" by daughter's claims of "abusive household"
Halsey on not attending the Met Gala: "I got leaky hurty boobs, a bloody swollen uterus"
You may also like
1 month ago
Here’s why those who take medication need to be extra careful in a heatwave
2 months ago
Met Éireann warns of thunderstorms as Atlantic system set to hit Ireland
3 months ago
Here's what the weather will be like this Saturday, Sunday and Monday
3 months ago
This weekend looks set to be the hottest of the year so far
3 months ago
Met Éireann forecasts "sunny spells" as temperatures set to hit 21 degrees this weekend
5 months ago
Met Éireann warn of snow for Easter weekend, as temperatures reach 19 degrees today
Next Page