The Pogues' Shane McGowan is finally marrying his longtime fiancée

A huge congrats is in order for Shane McGowan and his longtime fiancée Victoria Mary Clarke - they're tying the knot next week.

According to the Irish Sun, Shane and Victoria - who have been engaged for 11 years now - will fly over to Copenhagen next week to say their vows.

Shane’s long-term manager Joey Cashman told the publication that while he wishes them all the best, he unfortunately can't attend the wedding due to a family tragedy.

He said: “It’s a private affair for the pair of them but I’d like to pass on my congratulations and best wishes to Shane and Victoria.”

Meanwhile, on Thursday of this week Victoria took to Facebook to share a picture of her on board a plane with the caption, "Heading off on a secret mission."

Many rushed to the post, saying that they were excited for the journalist. 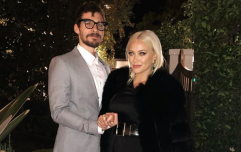 END_OF_DOCUMENT_TOKEN_TO_BE_REPLACED

At the beginning of this year, Shane celebrated his 60th birthday, and it was quite a glamorous affair.

Bono and Johnny Depp performed on stage together and Sinead O'Connor, Glen Hansard and Imelda May even made an appearance as well.

However, it is said that no celebrity friends will be in attendance at his wedding.


popular
Irish influencer Lisa Jordan reveals her little boy's name and it's so cute
The tooth fairy letter many parents are feeling a little divided about
Hobbits and hot tubs: My family's stay at Mayo Glamping
Capsule wardrobe: 10 items I am buying for my perfect 'mum uniform' this autumn
Former Queen member Brian May proves he's the best Grandad in heartwarming post
These 5 Foods Could Increase Your Chances of Having Twins
It's almost time: 10 back-to-school-once-more tips every parent needs
You may also like
11 months ago
Fair City's George McMahon marries longtime girlfriend Rachel Smyth
11 months ago
Dwayne 'The Rock' Johnson has just married his longtime girlfriend Lauren Hashian
1 year ago
Corrie's Tina O'Brien has reportedly married her longtime boyfriend in New Years ceremony
1 year ago
Dublin GAA star Cian O'Sullivan and Danielle Byrne tie the knot in lavish ceremony
2 years ago
Congrats! Kaley Cuoco marries Karl Cook... and she looks like a total dream
2 years ago
Vogue Williams CONFIRMS she and Spencer Matthews have tied the knot
Next Page