Do you pay the 'voluntary' contribution fee?

Despite the subsidies, schools stressed that they will still need parents to pay the voluntary contribution fee.

Both primary and secondary schools will be given a €90 million grant to cover their bills, including heating, energy, and lighting.

Earlier this summer, Barnardos stressed that it was time for the fee to be removed from schools as parents and guardians struggle with the rising cost of living.

Parents have slated the fee for years with many saying it puts even more pressure on families during back-to-school season.

However, the Catholic Primary School Management Association said the grant won't cover everything. The voluntary fee will help schools cover the remaining costs.

HerFamily readers recently slated the fees and said it is time for the government to offer more financial support to schools. 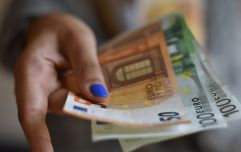 When will parents receive their Double Child Benefit Payment?

END_OF_DOCUMENT_TOKEN_TO_BE_REPLACED

One mum said parents are already paying enough to send their children to school.

"It's about time that necessities are provided by the government, and not through 'voluntary' contributions," one mum said.

Another added, "It’s an absolute disgrace that parents have to contribute this on top of paying for crested uniforms!"

"Total madness to say there is free education in Ireland."

Budget 2023 confirmed that parents will no longer pay for primary school books.

popular
People are realising what the red Christmas lights are actually for
Parents told to stop buying selection boxes for kids- here's why
This Netflix Christmas film is being dubbed the perfect rom-com
"My heart sank": Tubridy hit with backlash over Toy Show remark
It could snow in Ireland this week, according to Met Éireann
"Losing a baby is the ultimate loss, but to watch on over a video call is soul destroying"
Woman gives birth to baby boy and girl less than 12 months apart
You may also like
2 months ago
Government hoping to extend free schoolbook scheme to secondary pupils
2 months ago
Budget 2023: More needs to be done for children on the brink of poverty
2 months ago
Budget 2023: IVF to be publicly funded and free contraception for under 30s
2 months ago
Childcare fees to be reduced by up to €170 per month
2 months ago
Budget 2023: Parents will not have to pay for primary school books from next year
2 months ago
Double payment of child benefit on the cards to help tackle cost of living crisis
Next Page