"A budding star for the future!"

Prince William is a busy man these days between having just played a major part in his grandmother's Platinum Jubilee celebrations and also being in the middle of organising a move out of London to Windsor.

But the 39-year-old still found time this week to visit the England women's team for a chat – and a bit of a kick-around – at their training centre in Burton-upon-Trent. 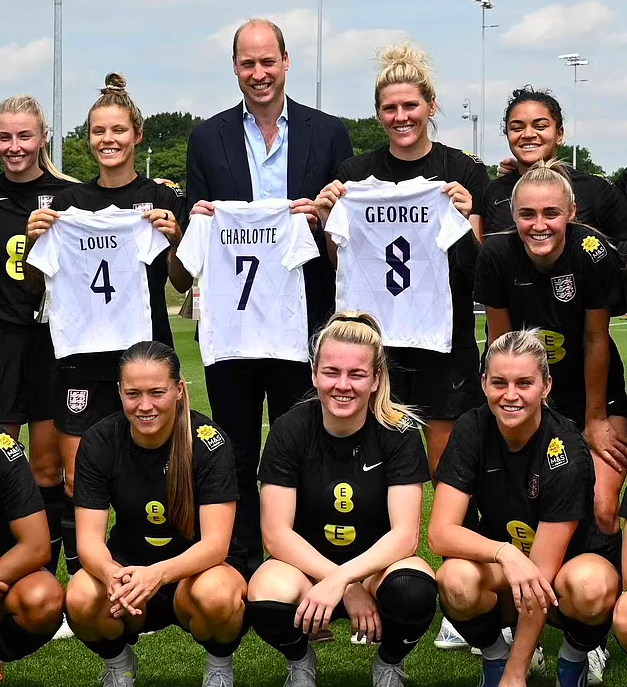 The royal seemed in great spirit kicking a football around with the team, and was all smiles when presented with some very special gifts for his children, Prince Geroge, 8, Princess Charlotte, 7, and Prince Louis, 4.

A budding star for the future

The royal children were given football shirts that appeared to have each of their ages on them, and after being presented with the gift, William commented:

"Charlotte wants me to tell you she's really good in goal...a budding star for the future!"

END_OF_DOCUMENT_TOKEN_TO_BE_REPLACED

As the dad-of-three was posing for a picture holding the football shirts, he noted:

"It will look like they've signed for the England team."

The royal also revealed that his eldest, Prince George, who will turn nine in July, plays football for a local team and 'gets very competitive.'

George's love of football has been no secret, with the royal celebrating birthdays with sports-themed parties at Kensington Palace and William saying he hopes his oldest son will one day be Villa's 'top goal scorer'.

The young prince is said to be an 'avid football fan' and has been seen with his parents at England and Aston Villa games, while Charlotte has also been spotted at Norwich games.

William is also an avid football fan and is a regular in the stands at Villa Park.


popular
I tried 'slow parenting' for a year and I'm never going back
Parent's Benefit Leave extended from today - here's what you need to know
"You're disgusting": Prince William roars at photographer who was 'stalking' his family
Your child's developmental checks and what you can expect during them
6 fun things to do in Dublin on your next family day out
Vicky Phelan shares message of support with Charlie Bird as she deals with pain
Children wearing wrong-sized shoes and pyjamas in daytime as parents cut costs
You may also like
3 days ago
Free contraception to be rolled out for women aged 17-25
3 days ago
19-year-old in critical condition after severe car accident in Cork
4 days ago
Children wearing wrong-sized shoes and pyjamas in daytime as parents cut costs
6 days ago
Abortions at record high – with cost of living and job insecurity partly to blame
6 days ago
Irish Cancer Society launches campaign for deferred maternity leave for cancer patients
1 week ago
Gardaí investigating serious shooting incident in Dublin
Next Page