"My princess, where are you?": Cleo Smith's heartbroken mum issues plea

"Please come home to me"

Ellie Smith has penned a heartbreaking note on Instagram as the search for her daughter continues.

The devastated mum says she just wants her 4-year-old daughter to come home.

Alongside a photo of her darling girl eating ice cream, Ellie Smith wrote: "My sweet girl, come home to me."

The mum added: "I miss you. I love you. Please come home to me. My princess, where are you?" she asked.

It's impossible to even understand the pain and despair Ellie is facing.

Her daughter has now been missing for over six days. 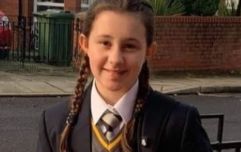 END_OF_DOCUMENT_TOKEN_TO_BE_REPLACED

Her plea comes after police in Western Australia confirmed all evidence points to 4-year-old Cleo being abducted.

They issued an update with the public on Thursday, October 21st.

Speaking to reporters, the investigators revealed the tent was opened too high for the young girl to reach. This means an adult would have had to open it on the morning she vanished.

They have ruled out the possibility the 4-year-old wandered off on her own.

The Government of Western Australia announced a reward of up to $1 million for information resulting in finding Cleo or leading to the arrest and conviction of the person or persons involved in her suspicious disappearance.

Detective Superintendent Rob Wilde said current evidence and the length of time Cleo has been missing led them to believe Cleo was abducted.

The mum said somebody out there knows where her daughter is.


popular
Boy (14) found guilty of murdering 12-year-old schoolgirl Ava White
"He will always be a danger": James Bulger's dad says son's killer should never be released
Am I a bad dad for encouraging my daughter to be a housewife?
Saoirse Ruane's mum says their family has been on an "emotional rollercoaster"
Infant poisoned by nurse "deteriorated quickly", hospital reveals
9 of the best outdoor family experiences in Ireland's Ancient East
Warning issued to dog owners about the "big stretch"

You may also like
7 hours ago
"He will always be a danger": James Bulger's dad says son's killer should never be released
10 hours ago
Infant poisoned by nurse "deteriorated quickly", hospital reveals
1 day ago
Nurse arrested after child dies from poisoning in UK
4 days ago
2 children hospitalised amid US baby formula shortage
4 days ago
What is chroming? Mum issues warning after daughter dies from dangerous trend
4 days ago
Boy who allegedly stabbed Ava White just wanted to "frighten" her
Next Page