We are howling at this gas photo of George, Charlotte and Louis

Say hello to your average family.

Today, Prince George is celebrating his sixth birthday and it seems like everyone under the sun wants to share pictures to celebrate it.

New photos of the prince, that were taken by his mum Kate, were released to mark the future king's special day and, as you probably already guessed, they're fairly cute.

The pictures were taken by Duchess of Cambridge, Kate Middleton, in the family's Kensington Palace garden. They show George lying down in the grass wearing an England jersey, smiling and laughing in front of the camera.

However, as Kate wanted to celebrate the day with pictures, a lot of other people did too. One group that uploaded pictures to social media were The Army in London.

They uploaded a photo of Prince William with his kids, George, Charlotte and Louis... and we have to say, it's a good one. 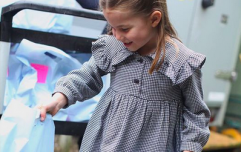 END_OF_DOCUMENT_TOKEN_TO_BE_REPLACED

Louis looks like a teenager who doesn't want to be in the picture, never mind in his dad's arms, while Charlotte is too busy looking at the giant dog beside her to be bothered to look at the camera.

Prince George looks happy out - but all in all, it looks like your average family trying to get a photo together. It just doesn't happen.


popular
Apparently there are 5 different types of grannies, and which one do your kids have?
Here is why you should always take a picture of your oven before you go on holidays
10 IRL struggles only breastfeeding mums will be able to relate to
An open letter to my daughter's creche – and all the people who cared for her
The morning wellness routine I started during lockdown that I now can't live without
The funny (and brutally honest!) baby cards that are perfect for new parents
Live news interrupted by doctor's child - and it's so cute
You may also like
1 month ago
Prince William reveals that mealtimes with small children can be a bit of a challenge
2 months ago
Kensington Palace just released some gorgeous new snaps of Prince Louis in honour of his birthday
2 months ago
It's Queen Elizabeth's 94th birthday today and the palace has shared some incredible footage of her as a child
2 months ago
Harry and Meghan say they will 'not be engaging' with UK tabloid press anymore
2 months ago
Prince Louis will be celebrating his 2nd birthday next week – and here's how it will go down
2 months ago
Princess Beatrice has cancelled her wedding due to #Covid-19
Next Page