The actress welcomed a baby girl in November.

New mum Rebel Wilson has been slated for going on a night out shortly after her daughter was born.

Mums called her out for going out shortly after the birth of her daughter, but was she really in the wrong?

One mum said, "I'm a new mother and couldn't even think about leaving my baby so soon after giving birth."

Another added, "She can do whatever she wants, as can any mum, but it does seem a little odd that a week after a baby that she longed for so long arrives and she’s out partying. Even if it was for an hour or so, it still seems a bit strange."

Many agreed that Rebel can do whatever she wants. Her followers stressed that being a new mum doesn't mean she has to give her own life up too.

The actress has not yet addressed the backlash. 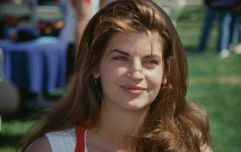 Cheers star Kirstie Alley has passed away after a short illness

END_OF_DOCUMENT_TOKEN_TO_BE_REPLACED

Rebel confirmed the arrival of her daughter earlier this month.

She posted a photo of her baby girl on Instagram to announce the joyous news.

She wrote, "Beyond proud to announce the birth of my first child, Royce Lillian, born this past week via surrogate.

"I can’t even describe the love I have for her, she’s a beautiful miracle! I am forever grateful to everyone who has been involved, (you know who you are), this has been years in the making."

Rebel's daughter was born via surrogacy.

"I particularly wanted to thank my gorgeous surrogate who carried her and birthed her with such grace and care."

"Thank you for helping me start my own family, it’s an amazing gift. The BEST gift!!"

"I am ready to give little Roycie all the love imaginable. I am learning quickly…much respect to all the Mums out there! Proud to be in your club."

popular
The government has launched a new funding model for Irish childcare services
The release date for season 12 of Call The Midwife has been announced
Nine-year-olds accidentally shown porn during kids' film at school
10 Sexual Positions That Only People With Kids Will Know
Female Athlete Has THE Best Response For Those Who Ask Her About Her Small Boobs
Here's your chance to WIN a €500 toy voucher just in time for Christmas, with Petits Filous
Toni Collette announces divorce from David Galafassi after almost 20 years of marriage
You may also like
1 week ago
Mollie King announces death of her father just weeks after welcoming her baby girl
1 week ago
Kelsey speaks out about moving on after Tom Parker's harrowing death
1 month ago
Nick Carter shares tribute following death of his brother Aaron
1 month ago
Nicky Byrne pens moving birthday tribute to his daughter
1 month ago
"I'm very single": Una Healy says you don't need a partner to be validated
1 month ago
James Argent (34) called out for dating 18-year-old girl
Next Page