Regé-Jean Page could return to Bridgerton for season 3

Regé-Jean Page is in talks to return to the show.

Regé-Jean Page is reportedly planning on returning to Bridgerton.

The actor, who rose to fame after playing Duke Simon on the show, left after just one season.

Page wanted to focus on other projects, including the upcoming film The Gray Man. However, now it looks like the actor is going to return to his roots.

According to reports, Page is considering a return to Bridgerton for season three.

A source told The Sun that the actor is seriously considering returning to the period drama, especially after the success of season 2.

The source shared, "Rege-Jean was always very open about his intention to quit the show after the first season and to move on to other projects.”

“But recently there has been a dialogue between him and the show’s bosses. Nothing has been formally agreed yet, but watch this space.” 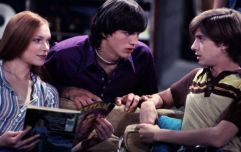 END_OF_DOCUMENT_TOKEN_TO_BE_REPLACED

“Things are very up in the air at the moment, but this will be an exciting year for Rege, without a doubt."

There's no doubt fans will be thrilled to see the actor return to the show.

Many believed season 2 just wasn't the same without the actor. However, that didn't stop the show from drawing in millions of viewers around the world.

Season 3, which will likely air early next year, will focus on Penelope Featherington and Colin Bridgerton.

Netflix confirmed the pair's love story will be the main storyline next year.

Read more: Here's the main storyline for season 3 of Bridgerton.


popular
TikTok star shows how to avoid sweat stains by using pantyliners
Wine and beer duty could be scrapped to help ease cost of living crisis
Giving our children experiences rather than toys makes them more intelligent
Here's where you can get the best deals on all your Back to School essentials
Shows like Bluey and Peppa Pig are actually bad for kids, expert warns
Forget about ultra cheap Ryanair flights for the foreseeable future, O'Leary warns
Baby twins die in hot car after dad forgets to drop them to creche