Rosanna Davison has spoken out about her surrogate who is trapped in Ukraine.

The mum gave an update on how she is doing as attacks continue across the country.

Rosanna, who welcomed her daughter Sophia via surrogacy, said she has offered the woman and her family a place to stay in Ireland.

Rosanna shared that her surrogate is unable to leave because Russian troops are surrounding her city, RSVP reports.

Rosanna shared, "It’s such a sensitive, difficult and traumatic situation for so many people to be in that really I just wanted to share what Wes and I can do to help at home and our experience."

"We reached out to our surrogate last week to invite her to come to Ireland to live with us until there was a time that it may be safe to return to Ukraine or who knows what will happen there." 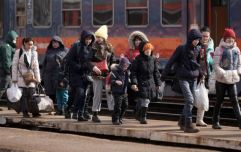 END_OF_DOCUMENT_TOKEN_TO_BE_REPLACED

However, the woman explained to Rosanna that it isn't even possible for her and her family to reach the Polish border.

"She has no way of getting out or getting to the border.

The mum added, "She has a little girl and she’s sheltering with her family.

"She doesn’t see a way out at the moment but we’re really hoping that at some stage it will happen."

Rosanna said her surrogate is such a special person and she is worried sick about her.

"We can’t even imagine if something happened to her."

The mum-of-three has been raising awareness about ways to support people in Ukraine, including surrogates.


popular
"You're disgusting": Prince William roars at photographer who was 'stalking' his family
Expert says Cocomelon acts "as a drug" to kids' brains
6 fun things to do in Dublin on your next family day out
"It's a competition" – one mum rants about teachers' presents and I agree
Mum who helped deliver best friend's baby finds out her husband is the dad
Fashion expert tells mothers what to wear on school run to not look 'old and frumpy'
Mum gets mixed reaction to photo of her drinking beer while breastfeeding
You may also like
1 month ago
Russian pre-school children are dressed as tanks and soldiers for Victory Day
1 month ago
Young Ukrainians show the reality of war through TikTok
2 months ago
Up to €400 a month to be offered to Irish households hosting Ukrainian refugees
2 months ago
91-year-old Holocaust survivor dies in basement during Russian attacks on Mariupol
2 months ago
Grandmother who fled Ukraine finally reunited with her beloved dog in Ireland
2 months ago
77 unaccompanied children have arrived in Ireland since Ukraine war broke out
Next Page