"It might seem odd to worry about not having children when I don't even know how much of a life I have left, but it's there."

Girls Aloud singer Sarah Harding has shared the heartache she feels over the fact that she can't have children due to her cancer treatment.

Harding has been battling breast cancer since 2020. Doctors told her recently that the cancer has spread around her body.

As she undergoes treatment, the star has been documenting her experiences in her memoir Hear Me Out.

In her book, Harding opens up about how she cannot have children, and the pain she feels as a result.

"I was saying how we never thought Nadine Coyle would be the first one of us to have a child," she writes. "Now three of them have kids."

She continues: "It might seem odd to worry about not having children when I don't even know how much of a life I have left, but it's there."

Recently, doctors told Harding that Christmas 2020 would be her last. 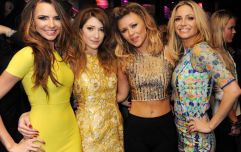 END_OF_DOCUMENT_TOKEN_TO_BE_REPLACED

"In December my doctor told me that the upcoming Christmas would probably be my last," she said. "I don't want an exact prognosis. I don't know why anyone would want that."

In her book, Sarah explains how she cannot have children, regardless of her prognosis.

"The truth is, even if my prognosis was better, it still wouldn't be on the cards because of all the chemotherapy I've had."

She continues: "That treatment, harsh as it is, will have killed any chance I might have had. It’s making me cry just thinking about it.’

Later in the memoir, Sarah shares that her tumours have shrunk.

She writes: "The tumours in my brain and in my lung have shrunk a bit with the treatment. I don't know exactly what this means but right now, every little victory feels momentous."

In spite of her health battle, Sarah maintains a positive attitude. She recently told Time that she's grateful to wake up everyday and understands how precious life is.