Kourtney Kardashian and Travis Barker tied the knot in Italy over the weekend.

The couple is already legally married but hosted a lavish celebration in Italy with all of their family and friends.

However, some famous faces won't be attending the couple's wedding.

Kourtney's ex-partner and the father of her children, Scott Disick declined an invite to the wedding.

A source confirmed to US Weekly, “Scott [Disick] won’t be at the wedding."

"Kourtney extended an informal invitation to Scott for the wedding, and she did add a condition if he decided to attend," a source revealed to Hollywood Life.

"She said he can go as long as he doesn’t make things weird or uncomfortable for her, Travis, or anybody else for that matter. But at this point, Scott is planning on sitting this one out." 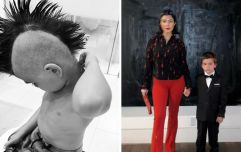 END_OF_DOCUMENT_TOKEN_TO_BE_REPLACED

According to sources, Disick has struggled to cope with Kourtney's new relationship.

The dad-of-three said he is happy for the couple, but sources say he is still uncomfortable around them.

Another insider told US Weekly, "He turns away any time he’s around them and they’re making out.

"It’s embarrassing, and Travis and Kourtney act like no one’s in the room whenever they’re together.

"Scott’s all about PDA but would never put any of his exes in such an awkward position.”

Apparently, Scott is still struggling to accept that Kourtney has completely moved on from him.


popular
Man reveals he spent an hour trying to save Irish girl (7) in Majorca
Get ready! Casa Amor is happening sooner than you think
Ryan Tubridy has moving reunion with Toy Show star Saoirse Ruane
Tipperary tragedy: Eldery man died from natural causes
Operation Transformation reveals she has given birth to a baby boy
Justice Minister Helen McEntee pregnant with baby #2
Deborah James says emotional goodbye to her brother as he travels to US for holiday
You may also like
4 weeks ago
Doctor warns women not to follow Kourtney Kardashian's fertility advice
4 weeks ago
This is why Caitlyn Jenner wasn't invited to Kourtney's wedding
1 month ago
"Where are your kids?" Kourtney Kardashian hit with backlash over her wedding
1 month ago
Kourtney Kardashian and Travis Barker officially tie the knot
1 month ago
Travis Barker visited Robert Kardashian's grave before proposing to Kourtney
1 month ago
Scott Disick claims his kids were upset after Travis Barker proposed to Kourtney
Next Page