A scramble for tickets! Daniel O'Donnell has announced his 2018 concert dates

That Donegal native has just come back from a three-week residency in the US, and is now looking to brighten up our Christmas.

Daniel has just announced that his new festive CD and DVD, Christmas with Daniel, will be released on November 24.

Christmas with Daniel was filmed in Dublin's National Convention Centre and has a massive 39 tracks on two CDs.

The album includes tunes featuring Mary Duff, The Presentation Choir of Britain’s Got Talent fame, the Rathdowney Choir and the Billie Barry Kids. 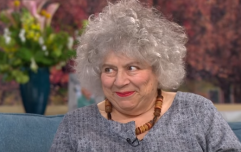 END_OF_DOCUMENT_TOKEN_TO_BE_REPLACED

However, if you want to see the man up close and personal, he has just announced his 2018 tour dates.

Yep, Daniel will play in the INEC in Killarney from 14-19 August 2018, and tickets are going on sale December 2.

You better scramble to get your hands on those tickets though, as they're sure to sell out fast!

popular
CMO confirms death of child in Ireland from invasive Strep A
Father took daughter to hospital three times before she died of Strep A
Elf on the Shelf is actually pretty bad for your kids, according to an expert
Rod Stewart's 11 year old son rushed to hospital after collapsing at football match
Expert says Cocomelon acts "as a drug" to kids' brains
"Hard to be a parent": Made In Chelsea's Maeva D’Ascanio rushes newborn son to A&E
The government has launched a new funding model for Irish childcare services
You may also like
4 years ago
Fans of Mrs Brown's Boys all had one thing to say after last night
2 days ago
The government has launched a new funding model for Irish childcare services
2 days ago
"I slept with your fella": Vogue reveals her ex cheated on her four times
2 days ago
Should pit bulls be banned in Ireland? Parents express concerns after recent attacks
2 days ago
"We are so in love": TOWIE's Billie Faiers welcomes her third child
2 days ago
Samantha Womack reveals she is now cancer-free
Next Page