Yesterday many families were left trapped on packed and stifling hot Darts after a mishap on the line caused major delays.

One father, Jason Byrne shared his experience during which he says one of his children suffered a panic attack. 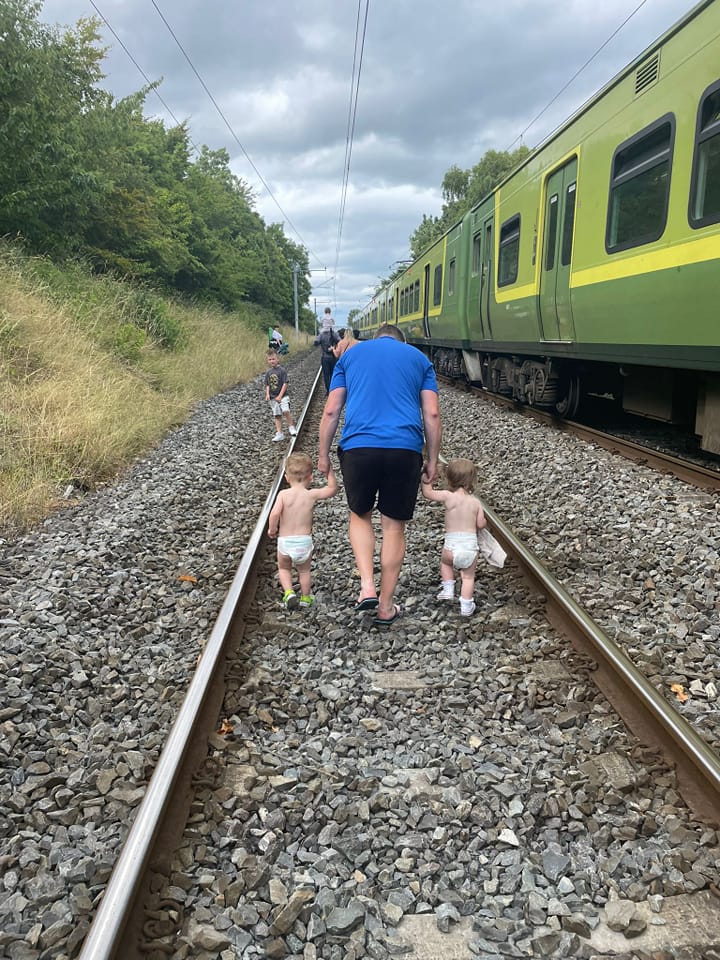 Terrible scenes today and it all falls on Iarnrod Éireann doorstep and then blaming passengers is just crazy!!!

Waiting for an hour in stifling heat (22 degrees outside) as you can imagine....the lovely packed trains that you put on for us were extremely hot with no air conditioning.

The train intercom was muffled and very hard to make out what was trying to be said, luckily we had a kind train driver who opened his door and explained as much as he could.

There was older people there that weren't looking well in that heat and sons/daughters concerned!

The two 18 month olds had to be stripped to their nappies and the 6 year old was hunched up in the corner having a panic attack."

"No parent in their right mind would want to get off a train and walk back to the nearest station but unfortunately we had to for the safety of our children, that might sound crazy but you weren't in those conditions.

Iarnord Eireann we were treated worse than a herd of cattle, we are your customers, we have children and babies to look out for and if we feel like you have let us down up to do point that we have to evacuate our children off a train by strangers passing down our babies!!!!

Well that's what we will do! THAT DECISION WASNT TAKEN LIGHTLY! We as caring parents totally reject your version of events as a PR stunt to escape your inadequacies of facilitating a large event."

Thanks guys! Yeh there ok luckily enough there babies and they forget easily enough, the 6 year old was terrified. Feel really let down by @IrishRail and then calling concerned parents "trespassers" because we got off after an hour. Disgraceful! pic.twitter.com/jG642Sy5bm

Mr Byrne is just one of many Dart users who has voiced anger at the treatment of train goers yesterday, with many taking to social media platforms to share their outrage at the situation.

popular
Five children rescued from van in Cork as driver is arrested
New parents are being "thrown out" of hospital far too early
6 unusual and unique family-friendly activities to try in Ireland's Hidden Heartlands this autumn
Liam Neeson says he talks to late wife at her grave every day
Expert says Cocomelon acts "as a drug" to kids' brains
Tayto Park has been renamed Emerald Park
Archie Battersbee's mum shuts down backlash over graveside party
You may also like
3 days ago
Why Cuba's redefinition of the family is so significant
3 days ago
Extra child benefit, IVF and free GP care: Key takeaways from Budget 2023
3 days ago
Son sues parents for throwing out his porn collection... and wins
4 days ago
Budget 2023: Parents will not have to pay for primary school books from next year
6 days ago
Hilaria and Alec Baldwin welcome baby #7 together: 'We are overjoyed'
6 days ago
Gardaí appealing for witnesses following fatal road traffic collision on M7
Next Page