We had no idea this was so risky.

A mum is warning parents of a common playground habit that is actually really dangerous.

She has told parents to stop letting their children sit on their laps when they're on a slide.

You may think it's super cute but is actually extremely harmful.

So many children have hurt their legs and even broken them because of this risky move.

Speaking on Instagram, one mum said you should let your child go down the slide alone, once their core strength is strong enough.

She revealed she tried to go down a slide with her toddler, but it ended badly.

"Here I was, a mom of 18 months, thinking how sweet to put my toddler on my lap for additional support.

"Boy, was I wrong & learned the hard way, 5 short months after he started walking…"

"Researchers at the American Academy of Pediatrics found that riding down a slide this way can actually increase the chances that a child could break his/her leg or get seriously injured in another way. 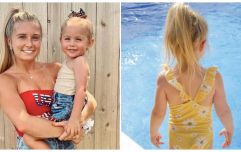 END_OF_DOCUMENT_TOKEN_TO_BE_REPLACED

"When they are sitting on the lap of a parent, the relative force is much greater because of additional weight."

The additional weight means you're going down the slide at a quicker speed.

This increases the chance of your child breaking a bone because they could catch their foot on the slide.

Many parents admitted they had no idea this was dangerous.

"I'd love to see signs up at playgrounds! Lots of caregivers don't have any idea it's dangerous," one said.

Another added, "This happened to my daughter. I had her on my lap and her foot got stuck under her body.

"The doctor also said he saw this so many times."

popular
Bride asks for divorce day after wedding following groom's disrespectful cake stunt
Entrepreneur schoolboy has made £1,000 from selling sweets
Police believe they know what happened to missing dog walker Nicola Bulley
Going on solo holidays is good for mothers, science says
Dad admits he hates his daughter's name so much it makes him uncomfortable
Couple decide to live on cruise ship permanently after finding it's cheaper than paying mortgage
Molly-Mae's nursery leads to spike in demands for replicas
You may also like
1 week ago
The car seat hack that could save your child's life in an accident
4 months ago
This pantry staple could save your child's life if they swallow a button battery
5 months ago
Stranger Danger: how you can help your child escape a dangerous situation
6 months ago
These are things police officers wish you’d teach your kids to keep them safe
6 months ago
Parents urged not to have blackout blinds in children's bedrooms
6 months ago
Summer safety: Here is why you should NEVER drape a blanket over your child's stroller
Next Page