Snow on the way? Weather expert reveals October is about to get a lot colder

Could Ireland see snow before the winter?

It looks like things are about to get a lot colder in Ireland.

A weather expert has warned that snow could already be on its way.

Yes, we know it's only October.

Apparently, a cold snap is approaching Ireland and it could bring a blanket of white snow with it.

An early little short blast of cold possible in about 10 days time🤔 pic.twitter.com/qQd1y7ONK5

He tweeted, "An early little short blast of cold possible in about 10 days time."

But before you dash out to stock up on loaves of Brennans Bread and loo roll, he stressed that it is too early to predict if we will experience snow like Scotland, England, and Wales. 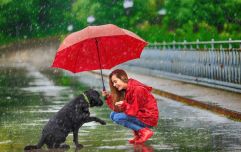 END_OF_DOCUMENT_TOKEN_TO_BE_REPLACED

It is believed the UK will see snowfall later this month as chilly conditions have been forecasted for our neighbors.

Wales is expected to experience quite the cold snap by the end of October.

The west of Scotland is also set to experience a chilly change in weather.

I guess it is time to root out the winter coats and giant scarves.

Met Éireann says the rest of the week will be mild and unsettled in Ireland.

It will be dry with scattered outbreaks of drizzle or light rain and light southeast winds on Friday. Turning misty in places with some fog likely.

The lowest temperatures will be in Ulster with lows of 2 degrees.

Saturday will be a wet day with a spell of rain, which will likely clear early in the night.

Sunday will be a milder day with a mix of cloud and sunny spells. Cloudier conditions will bring some patchy drizzle, but there will be a good deal of dry weather, Met Éireann confirmed.


popular
Parents with different surnames are being asked to carry their child's birth cert to travel but is it legal?
Dad's girlfriend complains he's spending too much time video-calling his child
Mum poured bleach into baby's feeding tube to get a good night sleep, court hears
"My princess, where are you?": Cleo Smith's heartbroken mum issues plea
17 NYC-inspired baby names we cannot get enough of
20 Unisex Irish Baby Names That Are Absolutely Magical
42 absolutely BEAUTIFUL baby names inspired by our favourite romantic movies
You may also like
2 weeks ago
School Run News: Weather advisory issued with heavy rain and flooding forecasted
3 weeks ago
Put the heating on: Met Éireann warns public of miserable conditions on the way
2 months ago
Ireland to become warmer and wetter due to climate change
3 months ago
Here’s why those who take medication need to be extra careful in a heatwave
4 months ago
Met Éireann warns of thunderstorms as Atlantic system set to hit Ireland
4 months ago
Here's what the weather will be like this Saturday, Sunday and Monday
Next Page