If you're an Adam Sandler fan, you'll like this. If not, you likely won't.

As actors go, he's fairly high up there on the Marmite scale - you probably either love or hate Adam Sandler, so be warned; he's on Friday's Graham Norton Show.

He joins Graham to talk about his new movie The Meyerowitz Stories (New and Selected) along with co-star Emma Thompson.

The movie, we have to admit, looks pretty good - it follows the members of a dysfunctional family living in the shadow of their father, who's played by Dustin Hoffman.

Adam speaks about his relationship with his own father in the interview.

"We were all scared for him and didn't want to upset him," he says.

"He was definitely all about family and we loved him more than anything but there was terror too. He was strong and intimidating.

"He named our dog Adam and would shout 'Adam, Adam, come here'. And when I came running, he would say 'Not you, the dog'."

In the same interview, Emma also talks about the time Donald Trump asked her out. *Shudder*. 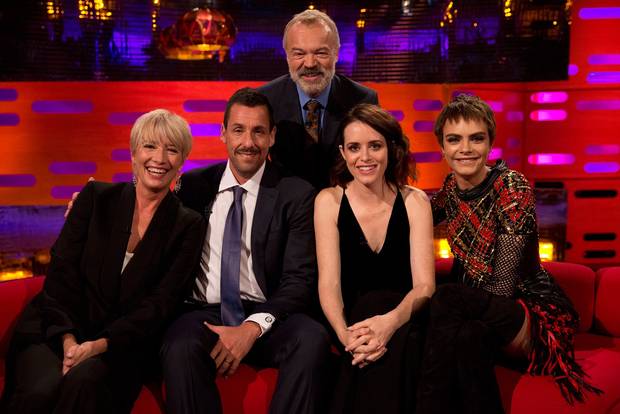 Also on the big red couch is Claire Foy, best known for playing Queen Elizabeth II in The Crown.

Cara Delevingne is on tomorrow night too and rounding off the line-up is Morrissey, who'll perform live.


popular
Get ready to live like the stars because Lidl is selling an entire home cinema range
Staycation: 10 bargain buys to turn your back garden into a chic hotel patio
Better sleep: 5 things you need to ban from your bedroom according to an organisational expert
Hair SOS: 3 seriously amazing hair products saving my lockdown locks
Kids still got a pesky case of lice with school out? Here's how to fix it
#MomLife: 7 things I wish I done more of when my children were babies
Raising boys: The beautiful words every boy mum needs to read
You may also like
1 month ago
Here’s the line-up for the first virtual edition of The Graham Norton Show tonight
2 months ago
RTE are set to broadcast an hour of 'school on TV' everyday from Monday
3 months ago
Joanne Froggatt has ruled out a season three of Liar
3 months ago
Liar's Joanne Froggatt teases what fans can expect from season two
3 months ago
ITV's new crime drama Honour will be the TV show that everyone is talking about this year
3 months ago
There's a Golden Girls-themed cruise setting sail next year and we're packing our bags already
Next Page